Most of us have heard the proverb "Good fences make good neighbors." 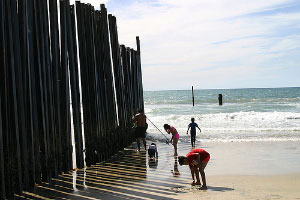 Concern for boundaries is ancient and not confined to human beings. Animals, too, set up territories for themselves with boundaries they may even defend to the death. The sense of "boundaries that cannot be passed" is a Biblical theme as well. Even land, sea and air were separated by God with boundaries when He created the world from nothing. (cf. Genesis 1; Psalm 104).

Creation is an ordered affair. The universe has laws which form the basis for the whole of modern science. It is not surprising to discover that the first scientists were deeply religious people who believed in such laws and boundaries, nor that some of the best contemporary scientists continue to be so, as well.

Partly, perhaps, to reinforce this sense of boundaries, the Old Testament set up many rules against mingling: Plant only one crop in a field; do not weave a mixture of linen and wool; do not remove a neighbor's landmark... (cf. Lev. 19:19; Deut. 19:14, Hosea 5:10). Indeed, we human beings are set in our own environment, apart from other creatures, living as individuals, families, communities, ethnic groups and nations. This is spelled out in many ways in most religions.

All of these boundaries create a livable environment for our existence. The life of a human being alone, without protection, would be snuffed out quickly.

Perhaps greatest of all is the boundary God placed between Himself and His creation. Since Adam and Eve were cast out of the Garden of Eden for their rebellion, we are reminded by Genesis that "man cannot look upon the face of God and live."

The story of the Tower of Babel is a tale of men taking the raw materials of creation to build a proud assault against this boundary.

Today we find ourselves living once more in such a Babel-like cultural building, where God Himself is challenged and questioned, along with any boundaries of God's making. If a technology exists, there are those who feel they should use it, no matter what may be destroyed in the process. We see terrorism, mass killing, genocide and global warming as the first signs that this modern tower of Babel will fall as surely as have all of its predecessors.

Human history is made up largely of following the growth, development, stunting and, at times, brutal destruction of boundaries - boundaries that begin with the first self-awareness of an emerging nation; a new group; an infant; the realization that one is no longer simply an extension of one's parent.

On the level of churches, nations, communities or any human group, adults who fail to develop a healthy sense of boundaries create anew all of the sins catalogued in the Old and New Testaments. Those in authority may be tempted to see the people under them, even their own children, simply as extensions of themselves, existing to serve them as their own hands and feet serve them, if perhaps with less respect and care than they treat their own hands and feet.

Those not in authority, especially in a democracy, may have a similar temptation, seeing those elected to positions of responsibility as extensions of themselves, with the expectation that they will please them and carry out their will in every way. God Himself would not be capable of pleasing everyone.

In fact it is appropriate for everyone at times to follow the instructions of others, to allow himself or herself to be trained.

None of us however - master, comrade, servant or disciple - will be able to accomplish our best if we cannot take responsibility for our own actions, perceptions and strengths. Wise masters gave even slaves the authority and tools to carry out work and obligations.

There is a saying that peoples, communities and groups get the leaders they deserve. I nod my head when I hear that said. Both leaders and people can enable each other in irresponsibility, corruption and abuse; can hobble each other into crippling inactivity, or, when we are at our best, inspire each other to greatness.

On a more intimate level, many of us have experienced families without proper boundaries between members. All sorts of abuse - physical, verbal and emotional - may go on when each person is seen as part of the undifferentiated family persona. The only boundary that may not be broken is that which shields this familial persona from the world. In public, each family member is expected to behave as if everything is perfect. Members of such families often have an outstanding presence in public. They do all they can to keep up the image of being part of a perfect family. On the outside, they seem to be charming, warm and compassionate, loving and considerate to all.

While it is good they have this side, this behavior creates great incredible pressure on those caught within. If a person tries to break free of the family secret, "blow the whistle" on what is sometimes even criminal behavior, the family will quickly retaliate, accusing them of lying. Outsiders may well reinforce this as well, preferring to see only a model family, with each member a "nice person."

It is a well-known phenomenon amongst "twelve step" groups that often the spouse and children of an addict may seem crazier in public than the addict himself. The addict is able to switch behavior on and off instantaneously, often leaving other family members to appear to an outsider as very flawed, while the actual addict is regarded as a lovely, sensitive person who has been "driven to drink" or to some other dysfunctional behavior by a spouse or other family member.

One who marries into such a family is in for a nasty shock. Until he or she is seen by the others as irrevocably one of the family, the sick, abusive family behavior may never manifest itself.

In 19th-century literature, this is a classic theme, with the sheltered, sweet Victorian bride who had known only sweetness and light, discovering on her marriage night that she has entered a nightmare world with no exit.

Communities and religious groups can also fall into this same type of behavior. We reflect on the Lord's well-known accusation: "Woe to you, scribes and Pharisees, hypocrites! For you traverse sea and land to make a single proselyte, and when he becomes a proselyte, you make him twice as much a child of hell as yourselves" (Mat. 23:15).

And the reverse may happen: a relatively healthy, peaceful and happy family or group may be joined by someone who perhaps even unknowingly projects their own abusive standards and behavior onto those he or she is with.

This happens in monasteries as well. Especially people who come from abusive backgrounds may not be aware that they have these "two sides," for denial may have been the only tool they had as children to survive in such an environment. Such people appear wonderful and charming as visitors and perhaps even for their entire period of probation. When they begin to feel secure in their community position, however, things begin to change. While guests and outsiders will still see the wonderful person, the community will begin to see an irrational display of depression, anger and jealousy, normally accompanied by accusation of others, since such a person has been formed truly to be blind to him or herself.

When I first entered the monastery, I recall being told by a wise old nun that every time I was bothered by observing what seemed to me someone else's wrong words or behavior I was probably seeing in them what I was unwilling to see in myself, to the extent that they might not even be thinking, saying or doing what I thought I felt, heard and saw: I was projecting what I would be thinking, saying and doing if I were in their position. I have since then learned that this wisdom comes straight from the Desert Fathers.

Until we are able to learn proper boundaries, we build instead the walls of our own prison. When we do not love ourselves enough to accept our own healthy boundaries and limitations, along with our many gifts and talents, we cannot love others properly.

Proper boundaries allow us to see another person with true detachment - and love. Without them, we will tend to swing between two extremes: we may feel totally "at one" with others, when they behave as we feel they should, seeing them as extensions of ourselves; or, when they speak or act in ways that make us feel threatened, we will feel totally alienated, needing to defend ourselves with ever greater physical, emotional or spiritual barriers.

When others try to live with us, they soon realize that they have no clues as to what "set us off" that time. They find themselves in a mine field, never knowing when the next step will cause yet another explosion, while we will be feeling all the while misunderstood, frightened, angry, and unable to face what we may unconsciously fear as hugely destructive forces within ourselves.

This is where blind trust and obedience can be life-saving for us. Some of us literally cannot see where we end and another person begins.

May we be given the grace to pray to begin to see this blindness of ours; to begin to accept at least some of what others tell us of their own vision. We need to find at least one other person whom God has led to health and trust them as blindly as we have previously followed our own destructive path, even when that person's words may seem to strike painfully at the very roots of our own sense of self and identity.

Such a healing process should not last forever, but it will need to last as long as our blindness exceeds that of our guide.

I believe it is good to seek such a healing process, although we should use every possible means first to be sure that we are truly choosing a doctor and not a fellow patient; a ship's captain, not just another drunken sailor, as St. John Climacus says of finding a monastic guide in The Ladder of Divine Ascent (Step 4:6).

While it is wonderful when we can find such a guide or mentor in our community, parish or church, we should seek out such a person wherever he or she may be found, however distant. That person need not be an authority in every area of our life. We may not need their training in theology, choir directing, bread baking or writing essays. But we do need to accept that in those areas where we are still "babes in our thinking," as St. Paul says (I Cor 14:20), we must start from the beginning in all humility.

What we are seeking is the ability to reach out in a healthy way to build godly bridges that in eternity will cross over boundaries to unite people, churches, nations in the unity of the Kingdom of God.

Mother Raphaela Wilkinson is abbess of the Community of the Holy Myrrhbearers in Otego, New York. Her books include Living in Christ and Growing in Christ: Shaped in His Image, both from St. Vladimir's Seminary Press. She is also a member of the advisory board of the Orthodox Peace Fellowship. Her text is a condensed extract from a two-part essay, "Boundaries and Bridges."