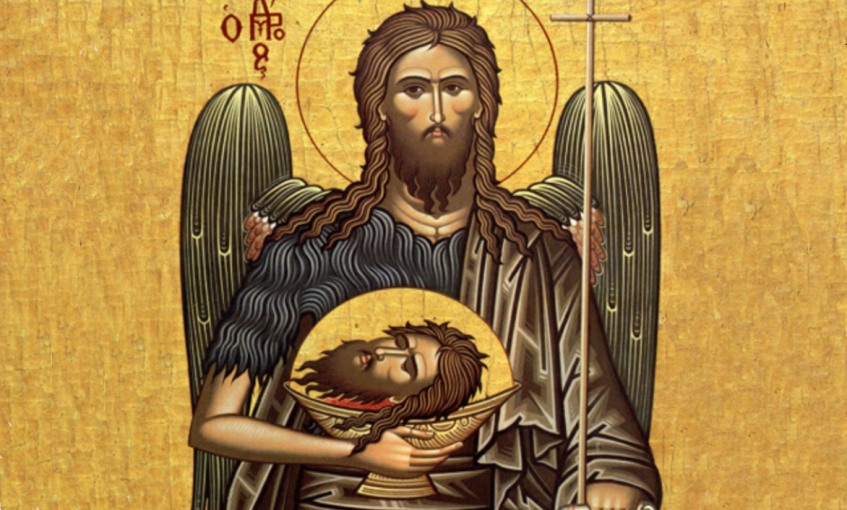 From Herod to ISIS through Christ: No Record of Retribution! 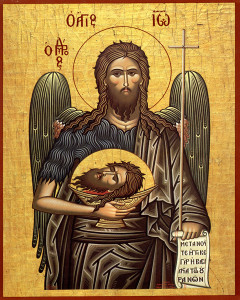 Having beheld the strange and ineffable humility of the Incarnate God the Word, O Divinely-blessed Baptist, when He bowed His Divine Head to thee and received a servile baptism, thou thyself wast wholly filled with great humility. Entreat therefore this Divinely-loved virtue for us also, who are possessed by pride, that we may cry to Him from a humble heart: Alleluia!

Wholly filled with the gifts of Grace, in finishing the course of earthly life, John the Divinely-chosen, thou didst teach all to please God well through fulfillment of the Law and repentance. Therefore, we sing out thankful praises to thee, the great teacher of truth:

Rejoice, planter of the law and statues of the Lord!

Rejoice, zealot for his correction!

Rejoice, thou who didst suffer imprisonment and
bonds for the sake of righteousness!

Rejoice, thou who wast beheaded for the truth!

Rejoice, for thy body was given an honorable burial by thy disciples!

Rejoice, for by God’s providence thy head was preserved incorrupt!

Rejoice, for it has granted consolation, sanctification, and healing to Christians!

Rejoice, for the faithful piously bow down also before thy right hand
which baptized the Lord!

Rejoice, for many miracles are thereby accomplished even to the present day!

Rejoice, for by thee the faithful are delivered from the dishonor of passions!

Rejoice, for by thee the sinful are moved to repentance!

Rejoice, great John, Prophet, Forerunner, and Baptist of the Lord!

O great and most glorious John, Forerunner and Baptist of the Lord! Receive from us now this supplication offered to thee, and by thy prayers, which are pleasing to God, deliver us from evil of all kind, and rescue us from eternal torment, and make us heirs of the Kingdom of Heaven, that throughout the ages we may chant unto God: Alleluia!

O Baptist of Christ, Holy Forerunner, last of the prophets, first of the martyrs, instructor of fasters and desert-dwellers, teacher of purity and close friend of Christ! I pray thee; I run to thee. Do not reject me from thy protection, but lift me up who am fallen in many sins; renew my soul by repentance, as by a second Baptism. Purify me, corrupted by sins, and compel me to enter therein where no corruption can enter: into the Kingdom of Heaven. Amen. (“The Akathist to St. John the Baptist,” Kontakion VIII, Ikos VIII, Kontakion XIII, Prayer to St. John the Baptist.)

Fr. John Parker of South Carolina recently wrote an article titled “An Orthodox Response to Beheading by Muslims” exploring the Church’s historical response to the martyrdom of its children and what it should be today.

The essay asks rhetorically “is violence—individual or large-scale––a possible Orthodox response?” To shape his answer, Fr. John looks at the examples of martyrs beginning with the first of the New Testament, St. John the Baptist, and the first of the new Church, St. Stephen. With each saint listed, Fr. John points to the historical record and it’s stunning silent testimony that “there was no record of retribution.”

Retribution for the murder of John or Stephen would be unthinkable! Imagine if Jesus had prayed for help to save or avenge John the Baptist––the entire Gospel would have turned upside down in a moment. We try so hard to find any justification in the Gospel for violence but there is none. Jesus never appealed to the authorities, raised a mob, or led a protest. He committed no act of violence––even when he cleared the temple, there is no record he harmed anyone. When he had the chance and justification at Gethsemane, he didn’t even encourage Peter’s zeal. What we could have done with different words! “Well done, Peter. Those who live by the sword understand the world. Today you defended me, but the time is coming when you must defend yourself. Wait until you gain strength. Today we will be passive because we are weak—one sword is simply not enough.”

One of the more remarkable aspects of the response of Jesus and his followers to the violence done to John the Baptist, Jesus himself, and the young Church is that their actions ran sharply counter to what might be expected. In fact, Rome saw its violence against them as preemptive––the authorities sensed rebellion everywhere. Palestine of Jesus’ day was swirling with political and revolutionary intrigue—the Jews desperately needed a political, military Messiah, and had Jesus wanted to inaugurate his kingdom with violence, he could have: The twelve legions of angels Jesus had standing by in the Garden were probably more than enough. The space of calm into which Jesus was born was brief and rippling with unrest, but waiting for a champion. And Jesus ignored it, did nothing to encourage rebellion, and gave an example exactly the opposite of what any sane person would have advised.

Instead, when Jesus heard of John’s murder, he retreated by himself, but when he saw people following him, he got back to the work of ministering mercy to them.

After the murder of St. Stephen the Proto-martyr—who prayed that his killers be forgiven even as the stones began to rain down on him—“was there an apostolic uprising?” as Fr. John teasingly asks in his essay. Instead, through responses of prayer, love, and forgiveness, the Church swelled with the numbers of its enemies its love prompted to conversion! Stephen pointed the way as he was dying by praying in the manner of his Savior on the cross: “Lord, do not hold this sin against them. Lord Jesus, receive my spirit.”

As Christians scattered throughout the region in response to growing persecution, they left us no record of raising bands of fighters to return to Jerusalem “to kill our enemies there before they come kill us here.” Instead, they continued to preach to hostile reception wherever they went, often with the same murderous response. The historical record is instead replete with evidence like that from the trial of St. Cyprian of Carthage:

At the trial, St Cyprian calmly and firmly refused to offer sacrifice to idols and was sentenced to beheading with a sword. Hearing the sentence, St Cyprian said, “Thanks be to God!” All the people cried out with one voice, “Let us also be beheaded with him!” Coming to the place of execution, the saint again gave his blessing to all and arranged to give twenty-five gold coins to the executioner. He then tied a handkerchief over his eyes, and gave his hands to be bound to the presbyter and archdeacon standing near him and lowered his head. Christians put their cloths and napkins in front of him so as to collect the martyr’s blood.

We must try to imagine––we can’t know––the human suffering these murders caused, the grief and fear experienced by the Christian community, or their struggle with hatred and desire for revenge, though millions of our brothers and sisters in Christ are living it today, many of whom are giving the same testimony the Holy Spirit has handed down through the Church from the time of the first martyr.

Fr. John wrote before the twenty-one Egyptian Copts were killed on a beach in Libya in February, 2015, but surely their witness may be added to his list. One mother who lost her son that day and couldn’t be blamed were she to demand angry justice said instead when she was asked if she had a message for her son’s murderers: “I thank you [ISIS], may the Lord touch your hearts and light a way for you so you don’t end up in a bad place—light a way for you so you don’t end up in hell.” Another mother whose son was also taken said she’d invite his murderer into her home “and ask God to open his eyes because he was the reason her son entered the kingdom of heaven.”

This makes no sense to the worldly minded because it is not of this world. It is the response of those who are in the world and know they are not of it. In “The Akathist to St. John the Baptist” we find joy, salvation, and consolation in contemplating not just the fact of his sacrifice, but in its purpose and Christ’s ultimate victory at the end of all things.  IC