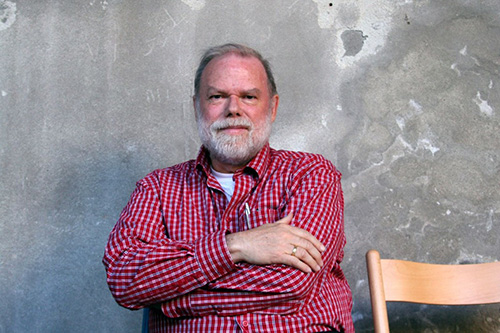 Jim Forest's activity as a writer began in New Jersey at age five, in 1946, when he produced a handwritten family newspaper using an alphabet of his own design. It was an excellent publication whose only shortcoming was that no one could read it.

A few years after achieving literacy, he was often found hanging around the office of the town's weekly newspaper, watching linotypers set type from molten zinc, a form of typesetting now associated with Dark Ages if not the Paleolithic Era. Before long he was hawking The Red Bank Register on Broad Street, delivering newspapers door to door, and starting his own mimeographed publication using an alphabet that others could read.

His engagement in Christianity began about the same time that he was selling newspapers. At age 12 he was baptized in an Episcopal parish in Shrewsbury, New Jersey, though it wasn't until he was in the U.S. Navy that he began to see his vocation in religious terms.

In 1960, while working at the U.S. Weather Bureau headquarters near Washington as part of a Navy meteorological unit, he joined the Catholic Church.

In 1961, after obtaining an early discharge from the Navy on grounds of conscientious objection, he joined the Catholic Worker community, led by Dorothy Day, in New York City; during that period he became managing editor of The Catholic Worker.

Later he was a reporter a New York City daily newspaper, The Staten Island Advance, and worked for Religious News Service, a press bureau.

Another dimension of Jim's life has been peace work.

In the late sixties, Jim was responsible for Vietnam program activities of the Fellowship of Reconciliation. One aspect of his work was to travel with and assist Thich Nhat Hanh, the Vietnamese Buddhist monk and poet.

In 1969-70, Jim was imprisoned for thirteen months as a consequence of his involvement in the "Milwaukee Fourteen," a group of Catholic priests and lay people who burned draft records. After leaving prison, he was a member of the Emmaus Community in East Harlem, New York.

Starting in 1973, he was appointed editor of Fellowship, the magazine of the Fellowship of Reconciliation.

In 1977, he moved to Holland to head the staff of the International Fellowship of Reconciliation. He was IFOR's General Secretary for twelve years.

In connection with work on two books about Russian religious life, in the 1980s Jim traveled widely throughout the former Soviet Union and was a witness to the final days of the USSR. His experiences in Russia were a factor in his becoming, in 1988, an Orthodox Christian. Jim is now international secretary of the Orthodox Peace Fellowship and edits its quarterly publication, In Communion.

Jim is the author of many books, including The Road to Emmaus: Pilgrimage as a Way of Life, Praying with Icons, The Ladder of the Beatitudes, The Wormwood File: E-Mail from Hell, and Confession: Doorway to Forgiveness. He has written two biographies that remain in print: Living With Wisdom: a biography of Thomas Merton; and Love is the Measure: a biography of Dorothy Day. Earlier books include Religion in the New Russia, Pilgrim to the Russian Church, and Making Friends of Enemies. He has written several children's books, most recently a true story about a community of rescuers in Nazi-occupied Paris: Silent as a Stone: Mother Maria of Paris and the Trash Can Rescue. With Tom Cornell and Robert Ellsberg, he co-edited A Penny a Copy: Readings from The Catholic Worker. Translations of his books have been published in Dutch, Italian, Spanish, Russian, Swedish, Danish, Polish, Korean, Japanese, and Romanian.

An occasional teacher, in the early seventies, Jim taught at New York Theological Seminary and the College of New Rochelle. In 1985, during a sabbatical, he taught at the Ecumenical Institute, Tantur, near Jerusalem, and in 1999 was part of the summer faculty of the Department of Religion at the University of Dayton.

Jim has led retreats in the USA and England and has lectured at hundreds of parishes, theological schools, colleges and universities.

An influential factor in Jim's life was his friendship with Thomas Merton, who dedicated Faith and Violence to Jim. Merton's letters to Jim have been published in The Hidden Ground of Love.

In 1989, he received the Peacemaker Award from Notre Dame University's Institute for International Peace Studies. He is also the recipient of the St. Marcellus Award presented annually by the Catholic Peace Fellowship.

After several years of being treated by kidney illness, in October 2007 Jim received a transplanted kidney donated by his wife, Nancy.

He is the father of six children and grandfather of five.

Since 1977 his home has been in Alkmaar, Holland, a city northwest of Amsterdam.

Here's an autobiographical essay, "Getting From There to Here."