The following excerpt is from the Orthodoxy in America Lecture given by Professor Albert J. Raboteau at Fordham University, Bronx, New York, entitled, “In the World, Not of the World, For the Sake of the World: Orthodoxy and American Culture” on April 4, 2006. An Orthodox response to poverty and social injustice, the lecture goes on to elucidate the teaching and actions of the Church Fathers in obedience to the Gospel commandments. Below we spotlight an almost forgotten moment in American Orthodox history – when His Eminence Iakovos, Greek Archbishop of North and South America, stepped forward as an Orthodox Christian against injustice.

By Pieter Dykhorst Racism cannot be addressed in isolation. Racism at its root springs from human divisiveness and our fallen propensity for conflict across difference,... Read More

By: Lydia Kemi Ingram After this I looked, and behold a great multitude that no one could number, from every nation, from all tribes and... Read More

The following excerpt is from the Orthodoxy in America Lecture given by Professor Albert J. Raboteau at Fordham University, Bronx, New York, entitled, “In the... Read More

And in Selma, Alabama, when I was being interrogated, and all the policemen spat in my face, the face of the white nigger-lover, and only grace kept me from spitting back—grace plus common sense, for I knew I would have been a dead white nigger-lover. I sat in Birmingham jail with Dr. Martin Luther King as he wrote “Letter from Birmingham Jail.”

BLACK AS SIN and white as snow. That was Abba Moses, the 4th century, desert Saint, known not only for the dark color of his... Read More

by Albert J. Raboteau a lecture given at the Orthodox Peace Fellowship conference at St. Tikhon's Monastery, South Canaan, Pennsylvania, in June 2002 On Sunday... Read More 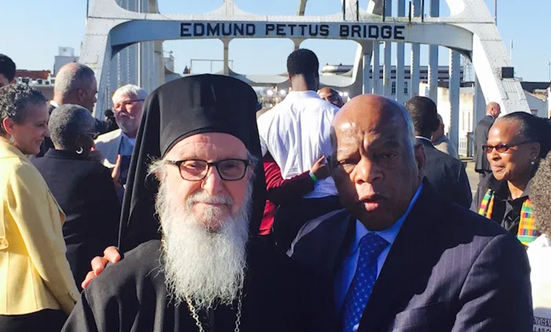 “Good Trouble”: John Lewis And The Triumph Of Faith, Hope, And Love by Alfred D. Turnipseed