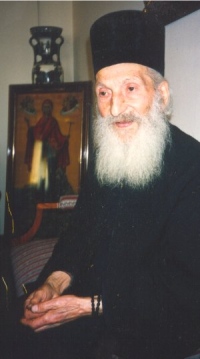 -- Patriarch Pavle, speaking at a news conference June 28, 1999, at the 14th-century Orthodox monastery in Gracanica

Here is a small collection from the writings and sermons of Patriarch Pavle.

Today, on this the Sunday following the feast of St. Sava, as on every other Sunday, brothers and sisters, the Holy Church celebrates the weekly commemoration of the greatest event of our salvation, the Resurrection of our Lord, Jesus Christ. Sunday is for every week what the Feast of Easter is for the whole year.

Before the Son of God, the One Who out of love for us and for our salvation was Crucified on the Cross and Resurrected by His Divine power, we prayed today, for the peace of the whole world, for the salvation of our souls, and for all our fathers and brothers who have gone before us.

In particular we served a general requiem where we prayed for all the souls of our brothers and sisters and children who shed their blood and lost their lives in the terrible of this senseless war.

In humbleness of heart we pray to God to receive their souls mercifully and give them rest in the Kingdom of Heaven, where there is neither sickness, nor sorrow, nor sighing, but life reigns everlasting.

While lamenting those closest to us by faith and blood, for all the hardship that came upon them, destroyed homes, churches, irretrievable destroyed treasures of historical and cultural significance, we lament the Croatian people also, for their misfortune and suffering as well as the destruction of their property and churches, their cultural and historical monuments, knowing that had we been better Christians and better men, this disaster could have bypassed us.

I appeal to you all, brothers and sisters, to spend this following week in fasting, in humility of heart, in prayer and repentance, that our conscience and mind at least be awakened from these tragedies, so that we see the teaching of the Gospel that it is not terrible to die for the sake of God's righteousness, but it is terrible to die for the sake of sin, not seeing and feeling its horror and the need for repentance, the correction of our lives, the return to God's way, the way of humanity, justice and truth.

Let us grasp the teaching of the Holy Apostle Paul, that one cannot accomplish good by evil means -- a lesson our mothers taught us through the ages, warning us that evil never brings good. Oh, that God would help us to understand that we are human beings and that we must live as human beings, so that peace would come into in our country and bring to an end the killing of Serbs and Croatians.

Lord, give rest to the souls of Thy servants who have been killed, our brothers, sisters and children. Lord, show Your mercy to all, and upon us. Amen.

Petitions composed by Patriarch Pavle for inclusion in all services:

At the Great Litany:

"For the mercy of God for us, His unworthy servants, to keep us all from hatred and evil deeds, to implant in us unselfish love, whereby all may recognize that we are disciples of Christ and people of God, as were our saintly ancestors, so that we may always know to ally ourselves with the truth and justice of the Heavenly Kingdom, let us pray to the Lord."

"For all those who committed injustice against their neighbor, whether they saddened the poor or spilled innocent blood, or returned hatred with hatred, that God grant them repentance, enlighten their minds and hearts, and illumine their souls with holy love even toward their enemies, let us pray to the Lord.

"O Lord, how many are the foes who war against us and say: 'There is no help for them from God or from man.' Lord, reach out Thy hand to us that we remain Thy people, both in faith and in works. If we must suffer, may it be on the road to Thy justice and Thy truth, and not because of our injustice or hatred toward anyone. Let us all say fervently, Lord have mercy."

"Again we pray to God, the Savior of all men, even for our enemies, that the Lord who loves mankind turn them away from violence against our Orthodox people; that they not destroy our holy temples and graves, that they not kill our children and persecute our people, but that they also find the road to repentance, justice and salvation. Let us all say fervently, Lord have mercy."

From the Introduction to the book, War Damage Sustained by Orthodox Churches in Serbian Areas of Croatia in 1991:

We cannot pass through this world without suffering and hardship. The history of mankind is filled with so much devastation caused by the elements, so much misery caused by man to his fellow man.

In the Holy Scriptures, God points many times to the suffering that awaits His faithful: In the world you have tribulation...; If they persecuted me, they will persecute you: let he who wants to go with me take up his cross and follow (Jn 16:33; 15:20). The Apostle Paul also says that we must enter the kingdom of God through many tribulations (Acts 14:22). The Apostle Peter even teaches that there is a difference between suffering for the sake of righteousness which, he says, is part of the suffering of Christ, and suffering for sins, and he warns the faithful: let none of you suffer as a murderer, or a thief, or a wrong-doer (1 Pet. 3:14; 4;15).

Not heeding this advice draws us into the madness of war that has befallen both the Croats and ourselves. It brings so much spilled blood and loss of lives, so many disabled persons, exiles and refugees, so many ruined material and cultural effects, so many destroyed churches, so many historical and cultural riches accumulated over the centuries that are lost forever.

The inestimable losses suffered, brought before our eyes and the eyes of the world, should jolt our senses and our conscience, and make us remember that we have been a Christian people for more than one thousand years, and that in so much time we have yet to learn the simplest teaching of Christianity: Do unto others as you would have them do unto you (Mt. 7:12). And what have we done with the essence of the faith, love, and love's highest form, love for our enemies, which means rising to the stature of our Father's hallowed Son who is in heaven, and the awareness that we are people of God, and to act accordingly. Let us try to achieve this. Then God will hear us and bring an end to the war, so that peace may reign in this turbulent world.

From an address by Patriarch Pavle on October 6, 1992, when he arrived in the US:

For over three decades as the Bishop of Ras-Prizren in the Kosovo-Metohija Province, I traveled by foot to many Albanian and Serbian homes to speak personally with them of peace. Due to the tragedy that has befallen the peoples of the former Yugoslavia, I once again must travel through the war-torn villages of my homeland, down Belgrade streets in protest of war, in search of peace. And now I have come to America to appeal for an end to suffering, for an end to this mindless war.

As you know, on May 27, as the Holy Assembly of Bishops of the Serbian Orthodox Church, over which I preside, condemned with great severity the hate-breeding nationalism that exists on all sides. We called on President Milosevic to step down, supported the Opposition parties' boycott of elections, and urged them as I urge now that a government of national unity and salvation be created that will enjoy the confidence of all the people.

I come to you just having met with Cardinal Franjo Kuharic, the Roman Catholic Archbishop of Zagreb on September 23. Together we appealed and demanded, on the basis of our spiritual position and moral responsibility, for an end to the violence. We condemned ethnic cleansing and the blasphemous destruction of all shrines and places of prayer, both Christian and Muslim....

I appeal to you, as I have appealed to Cardinal Kuharic and Islamic leader Reis-ul-ulimi Jakov, that each side must see the other, acknowledge each other's suffering, and approach peace through just negotiations. I appeal to you, to pray to God for peace in our country, and that truth illumine the hearts and minds of all those in whose hands the destiny of my people lie.

From a letter of Patriarch Pavle to the Islamic reis-ul-ulemi Jakov Selimovski:

I received your letter of June 1 in which with great sorrow you set forth the misfortunes of the faithful of the Islamic community since the outbreak of this mindless war in Bosnia and Hercegovina. You number the thousands of Moslems that were killed, mainly unarmed citizens, women, children and elderly men. You also number those who were interned in camps in the vicinity of Sarajevo, Bratunac, Bosanska Krupa, Zvornik and other places. You said that "all this is happening to a people only because they have a different culture, because they confess the Islamic faith and because they express the will to be free as other peoples are."

It is understandable that you, heading the Islamic faith community, see and feel the sufferings of your faithful brethren, as I, too, see and feel the sufferings of the Orthodox faithful, for they turn to me as to their spiritual father. But we must both see the other side, that the Orthodox and Catholics are suffering those same misfortunes. How many of them are in detention camps, how many wounded, how many killed, only because they belong to another nation, and to another faith, and because they also wish to be free as other nations are? And therefore they suffer at the hands of isolated individuals, brutes and criminals, whose behavior shows no regard for the faith to which they say they belong.

How many times have I begged and pleaded, spoken and written in the media, that peace must be obtained; that we begin to make a break with the killings and the evil, that we become the human beings that we are, and behave as men of faith in the one God of justice, truth and peace who calls us to righteousness and peace, but whose call goes unheeded.

From an interview in October 1992 in Niagara Falls, Ontario, quoted in the National Catholic Review:

Our goal must be not to see things only from one side, and have one rule by which we justify ourselves and another by which we judge our enemies, because then our enemies will do the same, and there will be no end. A crime committed by my brother is still a crime.

It is only the will of the devil that is served by this war, who through the ages is the killer of man and of everything good. We have the choice now whether to listen to him and follow his way, or to listen to God and follow His way.

Cain and Abel were the closest possible of human beings, brothers alone on the earth. And yet hatred occurred. Whether we are to be Cain or Abel depends on each of us, regardless of the pressures from the world or from our enemies. Our Lord came to this world to teach us how to be true human beings, how to become heavenly beings. His suffering and death give meaning to every instance of our suffering on the way to his justice. We should never fear dying for the sake of God's justice; but we should fear committing evil, for such sinners are the walking dead of this world. God has one standard for us all.