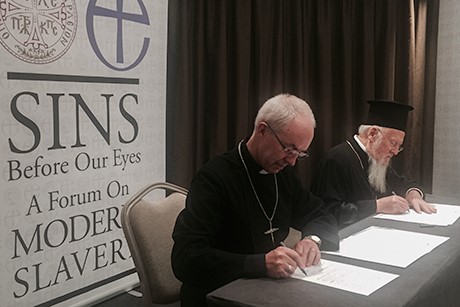 1. We, Bartholomew, Archbishop of Constantinople-New Rome and Ecumenical Patriarch, and Justin, Archbishop of Canterbury and Primate of All England, co-sponsored a special international Forum on Modern Slavery titled “Sins Before Our Eyes” at the Phanar from February 6-7, 2017. The Forum, originally proposed during the official visit by the Ecumenical Patriarch to Lambeth Palace in November 2015, was a high-level gathering of distinguished scholars, practitioners and policymakers from around the world, invited to discuss the contemporary problem of human exploitation. The Forum also takes place within the context of 2017: The Year of the Sanctity of Childhood, as declared by the Ecumenical Patriarchate.

2. For religious communities worldwide and for the global human-rights community, the protection of human dignity and fundamental human rights is of utmost importance. The role of the Church in the world is “to preach good news to the poor, to bind up the brokenhearted, to proclaim release to the captives and to set at liberty the oppressed.” (Isaiah 61.1, Luke 4.18) This was clearly articulated in the final Encyclical of the Holy and Great Council of the Orthodox Church (Crete, June 2016): “The Church lives not for herself. She offers herself for the whole of humanity in order to raise up and renew the world into a new heaven and a new earth.”

3. We are convinced that there is an intimate and inseparable link between preserving God’s natural creation and protecting God’s image in every human being, especially those most vulnerable to the myriad forms of human exploitation that comprise the sin of modern slavery. The same arrogance and greed are to blame for the oppression and exploitation of innocent victims—most often children and women—of human trafficking, human smuggling, prostitution, the sale of human organs, indentured labor, and the many other dimensions of modern slavery. Each and every person bears the burden and pays the price for the fact that there are more people in slavery today than at any other time in history.

4. In his keynote address, the Ecumenical Patriarch observed: “The Orthodox Church is often accused of neglecting the world for the sake of liturgical worship and spiritual life, turning primarily toward the Kingdom of God to come, disregarding challenges of the present. In fact, however, whatever the Church says, whatever the Church does, is done in the Name of God and for the sake of human dignity and the eternal destiny of the human being. It is impossible for the Church to close its eyes to evil, to be indifferent to the cry of the needy, oppressed and exploited. True Faith is a source of permanent struggle against the powers of inhumanity.” In his opening address, Archbishop Welby emphasized: “Slavery is all around us, but we are too blind to see it. It is in our hands, and yet we are too insensitive to touch it. The enslaved are next to us in the streets, but we are too ignorant to walk alongside them. It must not be relegated to a footnote in history. It is still a living reality in all of our communities, as I have seen from personal experience in the United Kingdom, not because we think it is acceptable, but because our sin lies in blindness and ignorance.”

5. Therefore,
We condemn all forms of human enslavement as the most heinous of sins, inasmuch as it violates the free will and the integrity of every human being created in the image of God.

We commend the efforts of the international community and endorse the United Nations Protocol to Prevent, Suppress and Punish Trafficking in Persons, especially Women and Children.

We pray that all victims of modern slavery may be liberated in order to rebuild their lives and that the perpetrators may be brought to justice.

We repent for not doing nearly enough swiftly enough to curb the plague of modern slavery, acknowledging that our ignorance and indifference are the worst forms of tolerance and complicity. We are judged each day by what we refuse to see and fail to do for the most vulnerable among us.

We appeal to local and national governments to pass and implement strict laws against modern slavery, with a budget and capability to ensure organizations are held to account for modern slavery in their supply chains, while also allocating resources and services for trafficking victims, who are exposed to and endangered by such injustice.

We encourage our leaders to find appropriate and effective ways of prosecuting those involved in human trafficking, preventing all forms of modern slavery, and protecting its victims in our communities and promoting hope wherever people are exploited.

We urge our faithful and communities—the members of the Orthodox Church and the Church of England—as well as all people of good will to become educated, raise awareness, and take action with regard to these tragedies of modern slavery, and to commit themselves to working and praying actively towards the eradication of this scourge against humanity.

We commit to the establishment of a joint task force for modern slavery to bring forward timely recommendations as to how the Orthodox Church and the Church of England can collaborate in the battle against this cruel exploitation.

✠ JUSTIN
Archbishop of Canterbury
and Primate of All England