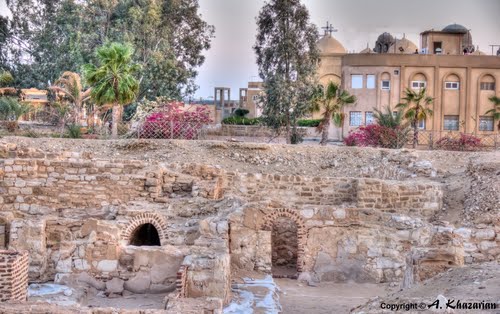 BLACK AS SIN and white as snow. That was Abba Moses, the 4th century, desert Saint, known not only for the dark color of his skin, but the deep stain of sin from which he was eventually cleansed and declared by his Bishop to “be wholly white.” A conspicuously large man with a particularly violent nature, he was once the leader of a gang of thieves, a carouser, and a brawler. Today, the region of Northeast Africa he once called home remains a tough neighborhood, without sufficient resources, and plagued by people who share Moses’ nasty disposition.Also known as St. Moses the Ethiopian, he was for a time a slave in Egypt. Nubia,Egypt, and Ethiopia (Moses was by one account, Nubian) together covered an area with a length nearly equal to the distance from San Francisco to New York, or from Gibraltar to Kiev, so it is difficult to say exactly where Moses was from, but we know from tradition that his robber gang traveled up and down the Nile, near the vicinity inhabited by the desert monastics. It was in the valley Wadi al-Natrun, then known as the Scetis Valley (from which we get skete as a type of monastic community), that Moses sought refuge from authorities seeking to capture him. And it was here that he would slowly convert to Christianity and eventually die a saintly Father of the desert Christians.

In the Sayings of the Desert Fathers (also collected under various other titles),we find many stories of the life and words of Abba Moses. Two aspects of his life commend him to us and bring him to the pages of our journal. One is the nature of his life and conversion, notably that he struggled mightily and long with his violent nature, even as a monk, but eventually became known for his non-violence. The second is that he is African, and he is here today to draw our attention to his home in East Africa where millions in Ethiopia, Kenya, and Somalia suffer from violence,disease, and famine.

Moses the man was once the furthest thing from Moses the Saint. An escaped slave, by one account dismissed for theft, he led a gang of 70 in marauding the countryside. In another account, he sought revenge on a man whose barking dog kept him from an intended robbery. He swam the Nile and found the man gone—hiding buried in the sand—so he killed two of the man’s sheep, swam back across the Nile with them, butchered them, feasted, and walked 50 miles to rejoin his gang.Several accounts note how for years he struggled with temptation to return to his robber life after he had chosen the monastic way. Once, while alone in his cell, four robbers attacked him. He whipped them, tied them up, slung them over his shoulders and took them to the church where he dumped them, declaring that it was un-Christian to harm them and inquiring what to do with them. When the attackers found out who he was, they repented and joined the community.The Sayings include several stories of Moses’ struggle to keep his peace. In one account, he was insulted and abused but did not respond. When asked if he was as calm on the inside as he appeared on the outside, he replied simply no. Another time,a monk asked his own spiritual father, with specific reference to Abba Moses’ habitual outward calm, what was the value of outward peace if there was no inward peace. The simple reply was that while not perfect, outward calm prevented harm and facilitated God’s grace to others.

An aspect of Moses’ learned humility is captured in a story in The Sayings of the Desert Fathers and is found on the icon on our cover. The story comes in a few form sand recounts a time when Abba Moses was asked to come help settle a disputes involving an offense committed by another brother. St. Moses refused. Eventually,he was prodded to come, so he arrived with either a basket or a sack on his shoulder width a hole in it, trailing sand behind him. When asked what this meant, he replied,according to a different version, “My sins run out behind me and I do not see them,and today I am coming to judge the errors of another.” At his words, the brother was forgiven, restored, and the meeting dismissed.

A deeply moving account tells of the day when “the barbarians” came to the monastic valley and Abba Moses was warned to flee. He refused. He told the monks under his care—the same number as his gang of robbers in his earlier life—to take care for themselves. They asked him again, would he flee? He stood his ground. They asked why, and he responded, neither hostile as in his past nor hopeful with the memory of when the four attacked him in his cell and were captured for Christ, but with clarity of understanding: “I have been expecting this day to come for many years past, so that might be fulfilled the command of our Redeemer, Who said, ‘Those who take up the sword shall perish by the sword.’” He welcomed the visitors on that day to his community, and they killed him, along with the seven who stayed with him. His witness to us is not one of a gentle temperament, not one of naïve hope that those who do not live by the sword shall live long and in peace, but that faithfulness carries a price, as does sin. On that day, St. Moses exhibited outward calm but stood with perfected, inward peace. To some, St. Moses is appropriately the patron saint of non-violence.

St. Baromeou Monastery in the Scetis valley where the relics of St. Moses rest.Photo used with permission by A. Kahzarian

But St. Moses is with us in this issue of In Communion for another reason. Quite simply, as he learned kindness, generosity, and hospitality during his long struggle to overcome his own violence and gluttony, he calls to us with a plea to share in prayer and hospitality with those who suffer in East Africa under the worst drought in decades. This has been much in the news, and we have included an item in our own news section, so no more will be said here. We ask simply that each of you would pray with St. Moses for the people of East Africa, that they may find peace and provision for their bodies and souls. And, if you are able and choose to, please consider contributing to International Orthodox Christian Charities (or to any other reliable charity you might prefer), which is working in the region to alleviate immediate suffering and on long term solutions to mitigate the impact of the natural draught cycles that affect the region. Feel free to share your thoughts and experiences,perhaps even a prayer, with the Fellowship on our blog.