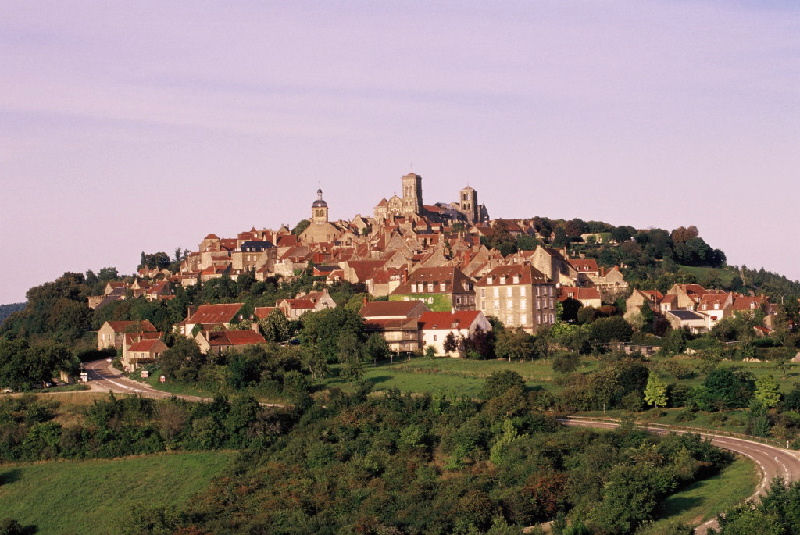 a report by James Chater

An Orthodox Peace Fellowship retreat took place in Vézelay, France, from 16-19 April, 1999, the weekend following Pascha. Vézelay rests on the edge of a hill situated on the edge of a national park in the heart of Burgundy, about 120 miles south-east of Paris. It is small, untouched by 20th-century development and off the beaten track, but as a religious center it has considerable importance: since the Middle Ages it has been a stop-over point for pilgrims on the way from northern or eastern Europe on the way to Compostela, and it was the launching-pad for the First and Third Crusades (even if, in this time of war, it is unpleasant to be reminded of this).

The Romanesque basilica is a haven of tranquillity and harmony (the choir sing rather well, and I was agreeably surprised that they incorporate Russian Orthodox texts and melodies in their liturgy). It is dedicated to St Mary Magdalene, preserving a relic of this saint, who according to one legend spent her last years in the nearby Rhone valley, and has exceptionally fine the carvings. Like the island of Iona off the coast of Scotland, where St Columba settled as penance for having been in military service, Vézelay makes a special impression on many pilgrims for its sense of 'thinness', through which God's light passes into this world. Light, music and prayer seem to envelop the place: a more suitable venue for an OPF meeting would be hard to imagine.

The retreat was led by Bishop Kallistos of Diokleia, well-known to many as the writer Timothy Ware, who lectures on Eastern Orthodox Studies at the University of Oxford and is assistant bishop of the Greek Orthodox Archdiocese in Great Britain.

The theme was 'The Sacrament of Healing', explored in a series of six talks titled 'Glorify God with your body: the healing of the whole person'; 'The passions: enemy or friend?'; 'Approaching Christ the Physician: the true meaning of confession and anointing'; 'In peace let us pray to the Lord: peace and healing in the Divine Liturgy'; 'Let us go forth in peace: healing in the parish and in the world'; and 'A peaceful end to our life: bodily death as an experience of healing'.

The bishop's profound insights, leavened with a warm sense of humor and a vast (so far as I could judge) knowledge of both Patristic texts and more recent literature, left me feeling uplifted and greatly heartened, and I felt sure the other participants were similarly affected. His sense of awe and wonder, of sacramental living, was vividly communicated to us. By the time Sunday came round, and we all crammed into the tiny Orthodox parish church to celebrate the Divine Liturgy, there was a renewed, more palpable sense of 'Christ in our midst'.

At one point the participants divided into two groups, one to discuss the issues of healing raised in the bishop's talks, the other to discuss how we might respond to the war in Yugoslavia, whose outbreak occurred long after the topic of the retreat had been chosen. A paper outlining the issues raised by the war was prepared by Father Stephen Headley and Jim Forest.

Mark Pearson suggested that OPF members should collaborate in round-the-clock prayer until the war was over. Various ways in which we might pray were considered, and participants were invited to commit themselves to a certain number of half-hour prayer sessions each week. The notion of a 'just war' was discussed: it was pointed out that most of the Anglican bishops believed the war to be just (Tony Blair has also stated several times that he believes the bombing to be 'justified'). The idea of the 'just war' was originally developed from Roman Catholic theology; even so, the Pope has called for an end to the bombing. Bishop Kallistos expressed his doubts that the Yugoslavian war met the criteria of a 'just war' as defined by Roman Catholic theology.

Our warm thanks to Bishop Kallistos for his leadership, to Jim Forest for his indefatigable organization, to the Franciscan Center Ste. Marie Madeleine and the Jerusalem Community for housing us, to our hosts, the Orthodox parish of St. Germain d'Auxerre and St. Etienne, and especially to their priest Father Stephen Headley and his wife Anne, for their unstinting hospitality, and for keeping us as well-fed physically as we were spiritually.

PS: For those unfamiliar with the Orthodox Peace Fellowship, the transformation of NATO from a defensive alliance into "world policeman" or machine of death and destruction (depending on your point of view) is a defining moment in the history of East-West relations. This might be the right time to consider supporting the work of an organization like the Orthodox Peace Fellowship, which advocates nonviolent ways of resolving conflicts and reconciliation by bearing witness to Christ's offering of Himself in the Eucharist. Members receive the quarterly newsletter, In Communion.

A few more photos from the retreat...