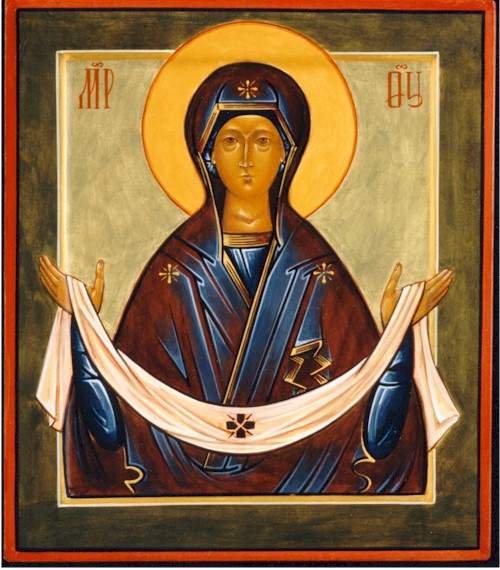 .2"Acquire the Spirit of Peace and thousands of souls around you will be saved." -- St. Seraphim of Sarov

By joining the Orthodox Peace Fellowship, you become part of a community of fellow Orthodox living in many countries who are trying to apply the principles of Christian faith to situations of conflict.

Both members and supporters receive the Fellowship's quarterly journal, In Communion.

Peacemaking in your home and parish

"In peace let us pray to the Lord." So we are reminded at every Liturgy. In your daily prayers especially remember to pray for your enemies or those whom you have trouble getting along with. Pray for the leaders of nations at war or moving toward war. Pray for those who refuse to take part in war, whose opposition to killing may result in punishment or social condemnation. Pray for those who shape public perception and opinion. Pray that God will help you become a channel of His mercy.

Suggest to your pastor inclusion in the Liturgy of special prayers for peace such as the following:

"We thank you, O Master, Lover of Mankind, King of the ages and Bestower of good things, Who destroyed the dividing wall of enmity, and granted peace to the human race, and Who now has granted peace to Your servants. Instill in them the fear of You and confirm in them love one for the other. Extinguish every dispute and banish all temptation to disagreement. For You are our peace and to You we ascribe glory: to the Father, and to the Son, and to the Holy Spirit, now and ever and unto ages of ages. Amen."

(Prayer for the pacification of animosity, from The Book of Needs, published by St.Tikhon's Seminary Press, South Canaan, Pennsylvania)

See also a longer prayer for personal daily use.

Christ told his disciples that some demons can only be driven out by prayer and fasting (Mark 9:29). Let us use not only the power of prayer but of fasting to confront the powers and principalities which promote violence and division in our world.

Help the victims of war

In every war zone there are many war victims desperately in need of help: people who have fled war zones or been driven out, many who have been robbed, raped, or seen family members murdered, plus large numbers of people wounded. Arrange for special collections in your parish to benefit the efforts of International Orthodox Christian Charities or other organizations working to help war victims.

Helping women in crisis pregnancies and working for pro-life alternatives

Sometimes the smallest sign of support, encouragement and caring can save the life of an unborn child, and save the child's mother from great sorrow later in life when she realizes what she did. Support a crisis pregnancy center in your area by money, donations of items mothers and new babies need, or volunteering. Consider participation in a prayerful, quiet presence outside an abortion clinic. You need say nothing out loud. Pray for the women going in and for those trapped in the abortion industry doctors, nurses and other staff. Become involved in a children's home or orphanage helping meet the needs of children who are born but have been abandoned or orphaned. Consider being a foster parent. Enjoy and bless every child you meet!

Participate in projects of helping those in need

"What you did for the least person, you did for me," we are told by Christ. We are called to live merciful lives and to take part in merciful activities, helping the hungry, the sick, the homeless, the neglected, and those in prison. Are there projects of service which you can take part in or help to start?

You can start a parish group to read together from the Gospel, liturgical texts, the lives of the saints or Orthodox theologians and historians, discussing the implications of what we are reading in our own time and place and how we can respond. OPF can provide a reading list and offer advice.

Many areas of conflict are hardly noticed. Local newspapers are often one-sided in their reporting and may be channels of propaganda. The Internet can give you the chance to sift through different points of view.

Talking starts with listening. What are friends, neighbors and co-workers saying? What can you say that builds on their concerns? Think of articles -- perhaps from this web site -- that you can copy and share with them.

Perhaps once a week you could find time to contact the press, your representatives, your president or prime minister, or other officials who play a role in the war. A one-page letter is more likely to be read than two.

An ancient Greek proverb reminds us, "In war, truth in the first casualty." Try to influence the content of news about the war, abortion, capital punishment and actions which damage the world around us. Write and phone editors of newspapers and directors of television news programs. Bring to their attention information not being covered -- you will find some of it on this web site. Provide suggestions for stories. Criticize one-sided reporting, trying to do so in a spirit which will open doors rather than lock them.

If carried out in the right spirit, prayerfully and without self-righteousness, public demonstrations can also help, but take part only if you agree with both the message and the spirit of the action. For example, one form of action that emerged during the NATO bombing of Serbia were hour-long evening prayer vigils on bridges in which those taking part hold candles or stand in a circle around a candle.

You don't have to be a member of the Orthodox Peace Fellowship to receive its publication. We do ask that you make a donation at least once a year. Drop us a note with your postal address and a sample copy of In Communion will be on its way to you.

Make material available for others in the church

Order a supply of the OPF magazine, In Communion, or other OPF publications that can be sold in the parish or be available in the parish library.

One way of helping people think about the place of peacemaking in Christian life is to think about the sayings and stories of saints and other devout people who in various ways have set an example. The Orthodox Peace Fellowship has a set of mini-posters, each with a saying or story from saints and heroes of Orthodoxy.

Help us carry on our work

The Orthodox Peace Fellowship exists thanks to the spiritual and financial support of its members and supporters.

Just send an e-mail letter saying you wish to become a member to: [email protected] and follow this up by sending a membership donation by post to:

in the USA tax deductible donations can be sent to:

Or donate via this website -- use the button in the right-hand margin.