This issue goes to the printer on the 16th of July. We hope it will be on its way to subscribers by the 20th, which on the Church calendar is the commemoration of St. Maria Skobtsova of Paris, along with several collaborators (Fr. Dmitri Klpinin, Yuli Skobtsov, and Ilya Fondaminksi) who also gave up their lives for daring to rescue Jews and others being sought by the Nazis in occupied France. 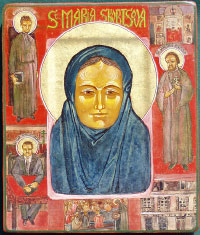 Behind Mother Maria's brave actions was her conviction that each person bears the image of God. "If someone turns with his spiritual world toward the spiritual world of another person," she wrote, "he encounters an awesome and inspiring mystery .... He comes into contact with the true image of God in man, with the very icon of God incarnate in the world, with a reflection of the mystery of God's incarnation and divine manhood. And he needs to accept this awesome revelation of God unconditionally, to venerate the image of God in his brother. Only when he senses, perceives and understands it will yet another mystery be revealed to him - one that will demand his most dedicated efforts .... He will perceive that the divine image is veiled, distorted and disfigured by the power of evil .... And he will want to engage in battle with the devil for the sake of the divine image."

Though I am unaware of her having written specifically on the topic of capital punishment, I have no doubt that she would welcome this special issue of In Communion with enthusiasm. As she said, even when the divine image is disfigured by the power of evil, it is still present. So long as a person remains alive, there is the possibility of repentance.

Would you take a moment to help keep OPF going? We need your support. Subscription payments and annual dues fall far short of our needs. We have two part-time staff members, myself and Sheri San Chico. We are paid very little for our many hours of work, but OPF's income doesn't justify more adequate payment. We also have a part-time web master, Michael Markwick. In addition there are all the usual expenses: office and publication costs, postage, telephone, travel, etc.

Note that donations can now be made via the OPF web site:

If you have made a recent gift or are one of those who makes regular donations or donates volunteer time, thank you! You are a God-send. If you aren't, please consider becoming part of our community of committed donors. If you can't manage a monthly or quarterly donation but can make an occasional special donation, please do so. Every gift helps.

We depend on our supporters to make at least one donation annually, but without those who give more than once a year, and give more than the minimum, we could not continue.