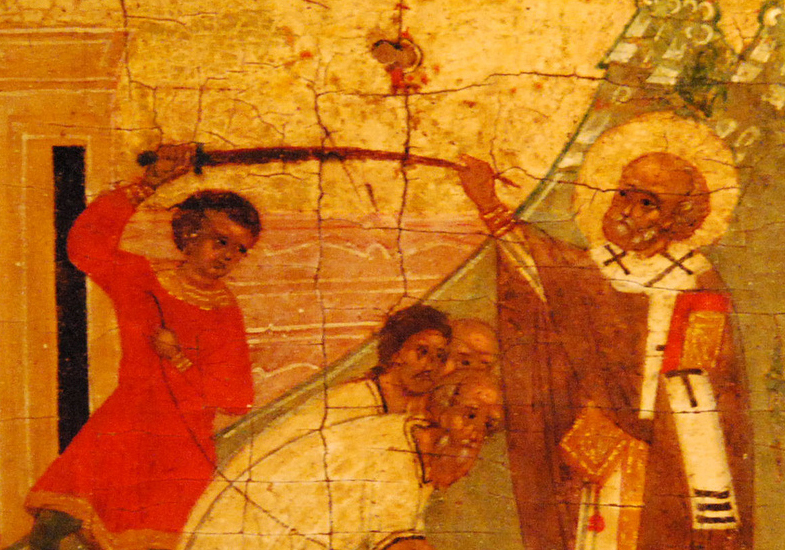 Vigil outside the prison the night of Philip Workman's execution. Photo by Harry Simpson.

Shortly after the sun set, the evening routine in our house is well underway. Dinner dishes litter the kitchen counters; children rifle through drawers looking for pajamas; and my wife and I scour the corners of our being in search of enough energy to complete the day. But the whole routine, tonight - May 8th, 2007 - seems stained with absurdity: for after I tuck my giggling children into bed, I will leave the house to stand vigil with others at our local federal penitentiary, where Philip Workman is scheduled to be executed at 1:00 a.m, for a crime he probably did not commit.

We remember St. Isaac the Syrian for, among other things, his description of a merciful heart: "It is a heart burning for the sake of the entire creation," he writes in his eighth homily, "for humanity, for birds, for animals, for every created thing. From the mercy which grips his heart, the merciful man is humbled and cannot bear to hear or see any injury or slight sorrow in creation. For this reason, he continually offers up tearful prayer, even for irrational beasts, for the enemies of the truth, and for those who harm him, that they be protected and receive mercy."

It is now 10:35 pm. I drive through the night and finally see the distant floodlights of the prison. Police cars are everywhere, and guards have blocked the entrance to the prison, keeping things orderly. Peace on the outside; pain on the inside. News vans, each with an antenna spiraling up from the roof, idle by the entrance.

Beyond the prison, a fenced-in field holds about eighty persons who have gathered quietly to protest the state-sponsored execution of Philip Workman. They appear as young as twenty and as old as eighty. They look like musicians and office people and housewives and college students and grandparents. Many look sleepy. Most folks cluster in groups of three or four, while some individuals kneel near the fence-line facing the prison, presumably in prayer. Every once in a while, there is laughter.

Two hours before the execution, and there is not much newsworthy. The screaming and sign-waving between pros and cons that often mark controversial events are totally absent here. If anyone supports this execution, he or she is keeping it secret. Speakers address us in quiet tones about how wrong the state is in doing this, about the exonerating evidence the state refuses to consider. We hear from persons who have lost loved ones to murder - one woman, her only son; another man, his mother - yet say they do not hate and do not wish to see the killers killed. The victim and his family - who, interestingly, share my last name - are remembered, too; peace and closure are hoped for them.

For those protesting outside an execution, possibilities are measured in minutes. The last time Philip Workman was scheduled to die, a stay of execution was granted thirty-seven minutes before the needle was to enter his vein. Thirty-seven minutes. It happened before, this crowd reasons, it should happen again. Appeals are made into the night that the governor, the state supreme court, common sense, or God Himself intervene.

It is now 12:32 am. The mood has grown serious and accepting. Candles, with circular drip protectors, are being passed among us. We have been asked by the vigil organizers to maintain silence from now until we hear some news. I wish the generators behind us, powering the floodlights, would cooperate. A man begins reading Psalms into the microphone: "O Lord, how many are my foes! Many are they who rise up against me! Many there are who say, 'there is no help for him in God'."

12:40. 12:47. 12:51. I foolishly try to imagine what Philip Workman must be experiencing right now, on the other side of that fence, behind those prison walls - foolishly, because I have no idea what he is experiencing, and it is an insult to him even to pretend as if I could. He has a daughter. I wonder: was he able to see the sun set tonight? Did he know he would never again see it rise?

Bodies begin to move restlessly. It is now almost 1:45 a.m. and we have heard no report. A woman standing beside me, a lawyer who worked on capital punishment appeals, says in a quiet and concerned voice, "The lawyer in me kicked in about twenty minutes ago; I wonder if something went wrong." With the chemical procedure, she means. Some people huddle around a transistor radio.

A few more minutes pass. Then, one of the organizers gets a call on his cellphone. He lowers his head. He closes his phone and reaches for the microphone, pausing for a few moments as if searching for the right words. "Philip Workman," he says, "is dead."

Several years ago, as part of seminary training, I visited a maximum security prison once each week. I met plenty of men who spoke eloquently about their innocence. Then, one week, I met a man who spoke eloquently about his guilt. He told me that he wanted to come to terms with the pain he caused people, and somehow find a way to make it up to them. He walked slowly, with a cane, and smiled easily. Toward the end of our time together, I asked him, "What is one thing that you want those on the outside to know about those on the inside?" He thought for a moment, face toward the floor. Then, he looked up and said, "That there are no throw-aways."

C.S. Lewis wrote, "You have never met a mere mortal." He wrote that in defense of the unconditional dignity and transcendent value of the human person. "Next to the blessed sacrament itself, your neighbor is the holiest object presented to your senses."

After arriving at home, I pass through the hallway near where my children lay sleeping. I mourn that the bubble they're in now won't last much longer. I mourn for Philip Workman, whether guilty or innocent. I mourn for a culture that is losing all sense of what life is, where it comes from, and what it is for. I even mourn that I do not know how to mourn rightly.

Fr. John Oliver is the priest of St. Elizabeth Orthodox Christian Church, in Murfreesboro, Tennessee. He is the author of Touching Heaven: Discovering Orthodox Christianity on the Island of Valaam, published by Conciliar Press. He also has a weekly podcast that can be heard at www.ancientfaithradio.com. A graduate of St. Tikhon's Orthodox Theological Seminary, he joined the faculty as instructor in Old and New Testament and American Religious History. He and his wife Lara have three daughters and one son. To learn more on the Philip Workman case, see: www.justicedenied.org/philip.htm and www.tcask.org/ cases/workman/workman.html.