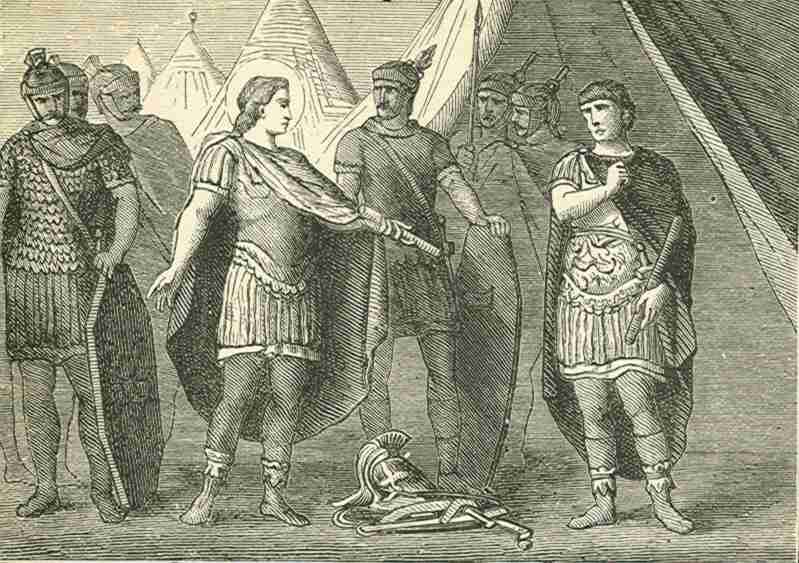 [Photo: The relics of St. Marcellus are preserved within the altar of the Basilica of the Sacred Heart at Notre Dame University, South Bend, Indiana.]

In the ancient Roman Empire, many Christians refused to serve in the imperial armies, finding it was in conflict with their baptismal vows and the teaching and example of Jesus.

In The Apostolic Tradition of St. Hippolytus of Rome, written in the second century and attributed to one of the first Bishops of Rome, renunciation of killing is a precondition of baptism: "A soldier under authority shall not kill a man. If he is ordered to, he shall not carry out the order, nor shall he take the oath. If he is unwilling, let him be rejected. He who has the power of the sword or is a magistrate of a city who wears the purple, let him cease or be rejected. Catechumens or believers, who want to become soldiers, should be rejected, because they have despised God." (Canon XVI: On Professions)

But what about soldiers who were converted to following Christ? One could not simply walk away from the Roman army. To be a soldier was like any other trade: it was not done for a few years but throughout adulthood, until one was too old or infirm to continue. Some were fortunate - their duties did not require the exercise of deadly force. A few - for example, St. Martin of Tours - were able to obtain a special discharge. Some took the path of martyrdom.

St. Marcellus the Centurion, after some years of army service, found he could no longer continue in military obedience. One day in 298, during the reign of the Emperor Diocletian, Marcellus's unit in northern Africa was celebrating the pagan emperor's birthday with a party. Suddenly Marcellus rose before the banqueters and denounced such celebrations as heathen. Casting off his military insignia, he cried out, "I serve Jesus Christ the eternal King. I will no longer serve your emperors and I scorn to worship your gods of wood and stone, which are deaf and dumb idols."

Marcellus was immediately arrested for breach of discipline. At his trial, he admitted that he had done that of which he was accused. He declared that it is "not right for a Christian man, who serves the Lord Christ, to serve in the armies of the world." Found guilty, he was immediately beheaded. According to the ancient testimonies, he died in great peace of mind, asking God to bless the judge who had condemned him.

As part of a protest against military training on campus, last year a play about

St. Marcellus was performed at Notre Dame by members of the Catholic Peace Fellowship. The text, by Tom Hostetler, closely follows the actual trial transcript.

The Passion of Saint Marcellus

Lucius, the narrator, comes out with helmet in hand, standing on the grassy knoll, north of a gazebo. The crowd gathers around. 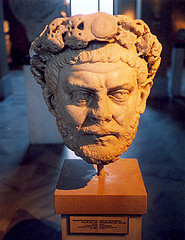 [Photo: Diocletian, emperor at the time of Marcellus's martyrdom bust in the Istanbul Archeological Museum]

What is the price of conscience? How far will a Christian go to be obedient to the teachings and example of Jesus? And how long will a faithful witness be remembered? Today we present the drama of St. Marcellus, a centurion in the Roman Battalion, who laid down his sword in order to serve Jesus Christ, and laid down his life in order to be faithful. It is presented briefly, and in the simplest form, from what is known in the historical records, so that you may know of his courage, sacrifice, and conviction. It is a true story, from the year 298 A.D., and one that belongs to all Christians. I invite the crowd to come closer, so that you may hear, and to follow us from place to place as the scene changes. In this drama, I portray the part of Lucius, Marcellus's friend and fellow soldier. Let us begin.

Lucius: Marcellus, I beg you to take back this sword.

Marcellus: I cannot. You know I cannot.

Marcellus: Lucius, you've been my friend for eight years in the Legion. I thank you for that. Never has there been a more loyal companion in any battalion. We've fought together, marched together, been ready to die together every day in service to the Empire. We've spilled rivers of blood, and I, just as you, thought of the enemies of Rome as little more than dogs to be slain.

Lucius: But they are enemies. Even if you are now a Christian, you can't tell me that you love them now.

Marcellus: They are children of God.

Marcellus: As we've killed theirs. And God is willing to forgive.

Lucius: Well, the vice-praetorian prefect is right over there, and he's not going to be forgiving.

Marcellus [placing a hand on Lucius's shoulder]: It doesn't matter. Christ is my commander now, and I will not betray him. You have heard the words of the Master; how he said to love your enemies, do good to those who hate you, bless those who curse you, pray for those who mistreat you. Now that I belong to Him, I must turn the other cheek.

Lucius: Marcellus, this will end badly. You will pay with your life.

Marcellus: Perhaps... I pray not... But still, my life is a small thing. Since my Lord has surrendered His life for me, can I now withhold my own? The Lord Jesus said, "Do not be afraid of those that can kill the body, but fear the one who owns body and soul."

Lucius [as guards approach]: They're coming. Marcellus, take back the sword!

Guard: Centurion Marcellus, you are ordered to appear before lord Aurelius Agricolanus, the vice-praetorian prefect.

Marcellus: I am at his command.

[All walk briskly to the court set.]

Herald: Come near to the court of our lords the Augusti and Caesars on this third day before the calends of November, to state business before lord Aurelius Agricolanus, the vice-praetorian prefect. Let all those who wish justice to be served announce their presence.

Cecilius: My lord, I am the consular official Cecilius, sent by the praeses Fortunatus, with a letter concerning this centurion before you.

Agricolanus: Let it be read out.

Cecilius: Yes my lord. [reads from scroll] "Manilius Fortunatus sends greetings to his lord Agricolanus. On the most happy and blessed anniversary of our lords the Augusti and Caesars, when we were celebrating the festival, this centurion Marcellus, seized by what madness I do not know, wantonly disgirded himself of belt and sword and decided to hurl down the staff which he was carrying before the very headquarters of our lords.

Marcellus stated before me these words: "I tell you today, loudly and in public, before the standards of this legion, that I am a Christian and cannot observe this oath unless to Jesus Christ the Son of the Living God." I have decided that it was necessary to report what was done to your power, even for him to have been sent to you also. My lord, this man is so presented to you.

Agricolanus: Did you do those things which are recorded in the praeses's record?

Agricolanus: Were you serving as a centurio ordinarius?

Agricolanus: What madness possessed you to cast aside your oath and say such things?

Marcellus: No madness possesses him who fears God.

Agricolanus: Did you make these separate statements which are recorded in the praeses's record ?

Agricolanus: Did you hurl down your weapons?

Marcellus: I did. It is not proper for a Christian man, one who fears the Lord Christ, to engage in earthly military service. What I have stated before to the praeses Fortunatus, I now state before you. I am a Christian, and call only upon the true God and King, Jesus Christ, whom I love more than all the honor and riches of this world. By His law and command, we are forbidden to take another man's life or even to bear arms. By His example, we are taught to forgive those who harm us, and have mercy upon our enemies. Those who call upon His name are children of peace, with no ill will toward anyone upon earth. Those who are conformed to the image of Christ know of no weapons other than patience, hope and love - and these are only weapons to break the flinty hearts that never have been affected by the heavenly dew of the holy word. We know of no vengeance, however we may be wronged. We do not ask for vengeance, but with Christ we pray, "Father forgive them, for they know not what they do."

Agricolanus: Do you not remember that you took your military oath, in rites over which all the gods presided, when you confessed the Emperor's deity. Have you forgotten how you received the standards upon which the image of the gods themselves were placed for your protection?

Marcellus: I will no longer sacrifice to gods and emperors, and I disdain to worship your wooden and stone gods, who are deaf and dumb idols. I serve Jesus Christ, the everlasting King! So far am I from seeking to escape suffering for the name of Christ, that I, on the contrary, consider it the highest honor which you can confer upon me.

Agricolanus: Enough! [Standing, addressing the crowd] Marcellus's actions are such that they must be disciplined. It therefore pleases (the court) that the Christian Marcellus, who defiled the office of centurion which he held, by his public rejection of the oath and, furthermore, according to the praeses's records, gave in testimony words full of madness, should be executed by the sword. Let the record so state. Take him away.

Agricolanus [to the guard and Lucius]: You both will carry out the sentence immediately.

[Agricolanus, Herald, and Cecilius exit. The guard takes Marcellus offstage (out of sight) and Lucius begins to go with them, but pauses midstage and turns to the crowd.]

Lucius: Marcellus was martyred for the cause of Christ and Christian conscience on that very day. His heart was steadfast and valiant. He did not fear death; nor was his life taken from him, but was changed into a better one. Among all of those who laid down their lives for the testimony of Christ, Marcellus produced within me a desire to know His Master, and to take his confession upon myself.

I do not know if others will follow this path he has forged, but I am ready now to lay down my own sword, and call only upon the true God and King, Jesus Christ.

[Lucius throws down his sword and staff and exits stage.]