While browsing in our parish bookshop not long ago, I happened to notice in a rack of cards a reproduction of an image of Eve being lifted by Christ out of Adam's body - a colorful miniature that comes from a 13th-century illuminated manuscript. Adam sleeps peacefully while Eve is wide awake. The right arm of Jesus suggests his power to create and also offers a sign of blessing, while his left arm grasps Eve's wrists in a gesture that reminds me of a midwife pulling a child from the womb. Jesus contemplates both Eve and Adam with a expression of wordless love. 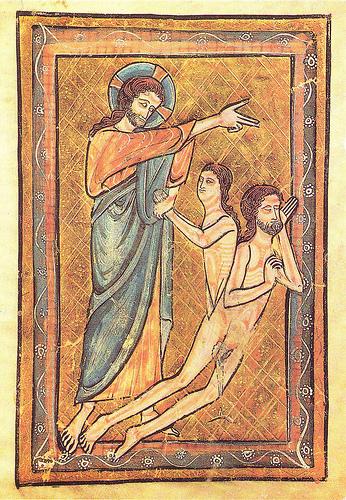 This special moment, recounted in the Book of Genesis, was a much-loved subject of Byzantine and medieval art. In churches, it is usually part of a cycle of wall images that begin with the creation of the cosmos and end with the expulsion of Adam and Eve from Paradise. In each scene, Christ is the key figure. Though not yet incarnate, we see him as the man he was to become through the body of Mary. The Church Fathers saw the Second Person of the Holy Trinity as the one especially involved in the work of bringing matter into existence and shaping it into the vast array of life forms, with Adam and then Eve at the pinnacle of created beings.

While I found this illumination an especially fine version, just about any of the images that have to do with Adam and Eve fascinate me. Among the primary stories of the human race, there are few more primary than those revealing what our ancestors imagined the first human beings to be like. Remarkably, those whose memory shaped the Bible saw Eve's creation as coming later than Adam's. Her being called into being is the final great event in the creation narrative.

Such a story has almost nothing to do with what, these days, we think of as history. In fact we know very little about the first human beings. Much that we think we know is speculative. But the Adam and Eve story is profound. It stresses an original oneness in Adam and Eve, the two of them mysteriously sharing one body until the Eve is drawn out of Adam.

According to Genesis, before the Fall, Adam and Eve lived in a borderless paradise. They were not in competition with each other.

Was Eve made from one of Adam's ribs? So the most familiar English translation of Genesis has it, but biblical translators point out that the Hebrew word in question, tsela, also means "side." In that reading, Eve was one side of Adam. What is clear in either reading is that, before Eve emerged, she was an integral part of Adam. Adam carried Eve like a secret. Thus Adam's maleness is coincident with his separation from Eve and the revelation of her femaleness. She is his other half, as he was her other half. Only in their complementarity, their actual oneness, are they whole. Both equally bear the image of God, and both equally bear the calling to acquire the divine likeness. As St. Gregory of Nyssa wrote: "One who is made in the image of God has the task of becoming what he is."

At the same time there is the elusive but compelling memory that has long haunted the human mind of a primordial Eden - a paradise in which there was no conflict, no murder, no war. After Eve's creation, man and woman live together in an unwalled oneness, a relationship with no trace of enmity. (The first murder, Cain killing Abel, occurs only after Adam and Eve have been expelled from Eden.)

But then comes the Fall. Eve is successfully tempted by a satanic serpent, Adam is tempted by Eve, and both eat the fruit of the forbidden tree. Suddenly they discover themselves not only naked but in a world in which walls are erupting all around them. In place of unity comes blame - Adam blaming Eve, Eve blaming the serpent, and neither repenting or appealing for God's mercy and forgiveness. Ancient iconographic images of Adam and Eve often show them on either side of the forbidden tree, a wall-like barrier isolating them from each other. The unity they originally had is not altogether lost - it remains at the roots of human identity - but no longer is our original unity effortless. Men and women will in the future commit countless sins against each other. Men will even justify their domination over women as part of the punishment for Eve's - not Adam's - sin in Paradise.

Most of us live a long way from Eden. We live in a world in which "the war of the sexes" is the oldest war of all. The ongoing combat between men and women was touched on by a recent New Yorker cartoon. We see a newly married couple standing side by side next to a huge wedding cake. Each is holding a plate with a piece of the cake, while the bride says to the groom, "Your piece is bigger." One wonders if this marriage will last through its first anniversary. Husband and wife are focused not on each other but on invisible scales: who is getting the better deal? At least, one assumes, the two cake-eaters have a carefully written prenuptial contract that will make their divorce slightly less complex.

Even so, it remains a great honor to be among the descendants of the first man and the first woman. An ancient Jewish commentary reveals our royal status by posing a question: Why was there only one Adam and only one Eve? The answer the rabbis gave is so that no human being could regard himself or herself as being of higher descent than anyone else.

The basic fact about all human beings is that we all belong to exactly the same family tree. More than that, we all bear equally the image of God and all bear the same calling to recover the divine likeness.

The human race has been far from paradise throughout known history. Who can guess in round numbers how many have been murdered down through the centuries? Most of the killing has been done by the sons of Adam, but often enough on behalf of Eve, if not with her fervent encouragement. These days, sadly, the daughters of Eve are increasingly joining the armed men on the world's battlefields.

For Nancy and me lately, this image of Adam and Eve has acquired another level of meaning. On the last day of October, one of Nancy's kidneys was removed from her body and implanted in mine. After five years of kidney illness and twenty-one months of dialysis, I now have a healthy kidney, my wife's gift.

And what a gift it is. Renal failure had come on so gradually that I was barely aware of how sick I was even on the eve of the transplant. I knew in theory that each year on dialysis meant a life likely to be shortened by three years (which even so beats the rapid death caused by kidney illness without dialysis).

Now that the transplant has happened and has been a success, I suddenly realize just how much impact the illness had on me. I feel a little like Rip van Winkel waking up from a multi-year nap. Even in these first few weeks, while still recovering from surgery, I find I tire much less easily than was the case a month earlier. I was often sleeping eight-and-a-half or nine hours a night, and even then prying myself out of bed with a mental crowbar. Now seven-and-a-half hours is more than enough. The creatinine level in my blood, a key marker of renal failure, has fallen from 900, just before the transplant, to 120 or so. There are other markers. Food tastes are more vivid. The world seems brighter, colors more intense. I find myself looking at familiar things with an Adam-like sense of surprise. A friend told me how her brother, after receiving a donated kidney, felt like he was seeing the sky for the first time in ages. That's a nice way of putting it.

All this is a gift from my wife, a daughter of Eve, from out of her own side.

Nancy and I have put this image of the oneness of Adam and Eve among the icons before which we pray morning and evening. It serves as a visual reminder of what God intends for man and woman: a mysterious unwalled oneness in which neither dominates the other but rather both collaborate - a partnership in which neither supplants the other and neither is complete without the other. This is the daily two-way traffic between the sons of Adam and the daughters of Eve, a life of self-giving love.

Jim Forest's most recent books are The Road to Emmaus: Pilgrimage as a Way of Life (Orbis) and a children's book, Silent as a Stone: Mother Maria of Paris and the Trash Can Rescue (St. Vladimir's Seminary Press). He and Nancy have an online journal about the kidney transplant: A Tale of Two Kidneys: www.ataleof2kidneys.blogspot.com.