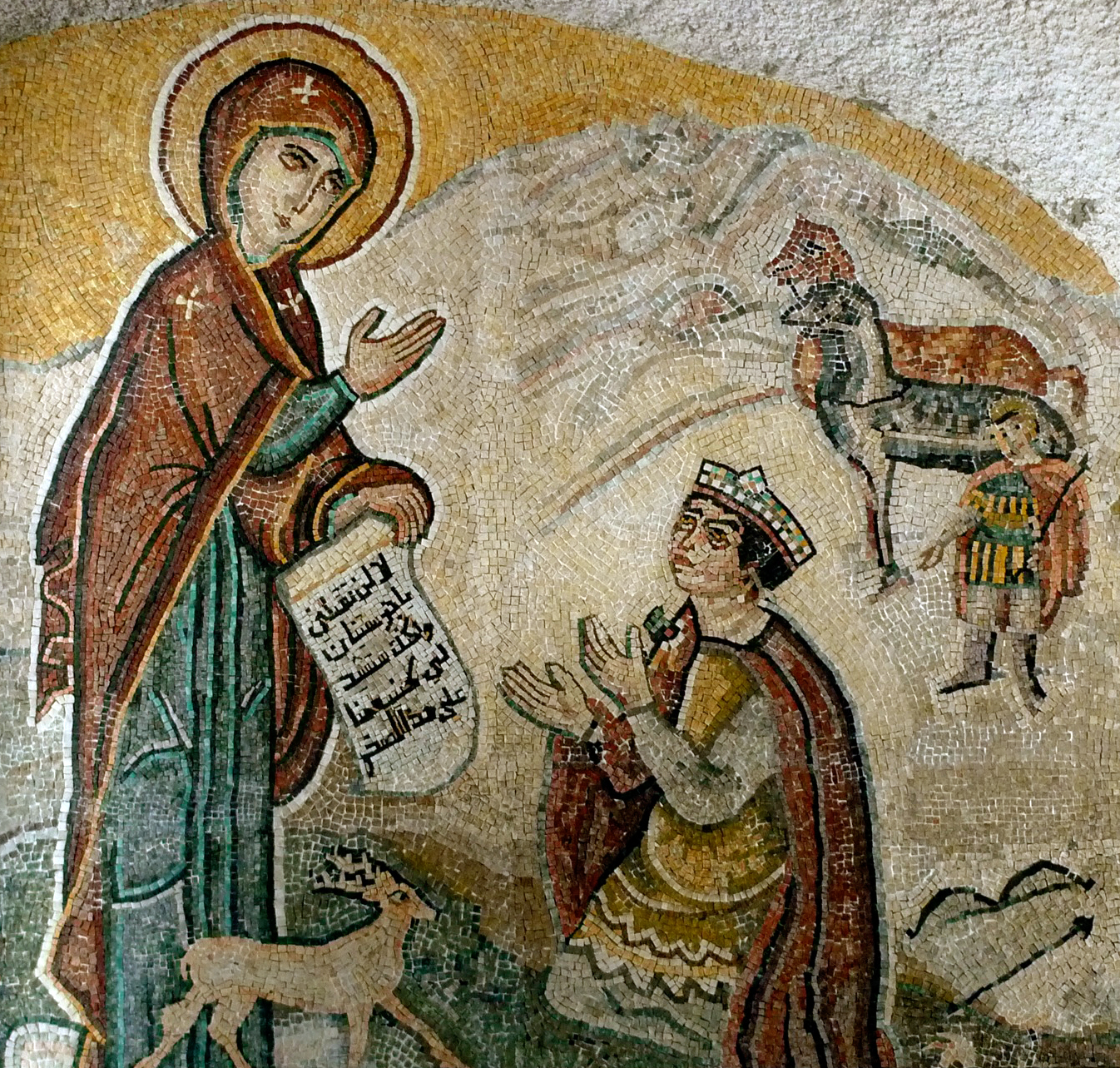 The Way, the Truth and the Life": if we believe that Christ is all these things, we must seek to avoid falsehoods, in personal but also in public life. To lie about weapons of mass destruction in Iraq was not just politically misguided or un-ethical, it was un-Christian.

Many of the antagonisms which lead to war in our world feed on lies or half-truths about "the other." This is especially true when two communities have a history both of coexistence and conflict. It is easy then to find justifications for fearing, hating and even attacking "the other."

Thanks to geography, Orthodox Christians and Muslims have had a shared history since the rise of Islam in the seventh century. Sometimes Muslims dominated Orthodox, as in the various Near Eastern Muslim states and the Ottoman Empire, sometimes Orthodox dominated Muslims, as in Tsarist Russia. Any community living under the domination of others suffers injustice, and both Orthodox and Muslims can point to wrongs they have endured as minorities ruled by adherents of the other faith.

Since before modern times the two communities identified themselves first and foremost by religion. They remembered wrongs - even when they had nothing to do with religion - as inflicted by Muslims on Orthodox (or the reverse), rather than as, for instance, by tax-collectors against peasants or soldiers against civilians.

As time passed, these memories became simplified, creating a picture of oppression remaining at a constant level over four or five centuries. In some cases the oppressor was then held responsible for everything that had gone wrong, although quite other factors might have been involved. Unscrupulous politicians could, and can, easily turn such a sense of injustice suffered into a desire for revenge, as the break-up of Yugoslavia has shown.

If we leave aside our collective memories and what we imagine the past to have been and look instead at contemporary records, we find a much more complicated picture. This corresponds to our own experience of life. Few situations we encounter are entirely black or white.

To take a concrete example: the book of memoirs and advice written by Synadinos, a priest who lived in the town of Serres in Macedonia in the first half of the 17th century, mentions violent attacks by Turkish (Muslim) fellow-citizens on the (Greek) Christians but also recognizes the just decisions handed down by high Turkish officials. He describes a combined attack by inhabitants of the town from all the different communities on a Muslim merchant who was selling grain abroad during a famine. And he feels loyalty towards the Ottoman Sultan, for whom he uses the Byzantine title "basileus," rejoicing sincerely at the victories in Iraq of Sultan Murad IV, whom he admires for his good governance.

Judging by the space they take up in his memoirs, Synadinos suffered most of all from the conflicts and envy of members of his own community; these outweigh both oppression by the Turks and his grief at losing six of his children in early childhood. And indeed some of the worst Turkish outrages, such as their desecration of a church and turning it into a mosque, came about because quarreling Christians appealed to them to intervene.

What Synadinos writes about 17th century Serres does not necessarily hold good for the town a hundred years later or for elsewhere in the Ottoman Empire in the same century. The assumption that the same conditions obtained everywhere in this vast area is mistaken. For instance, the devshirme (the levying of Christian boys for the Janissaries) inflicted on Balkan Christians, was seldom carried out in Anatolia and never in the Arab provinces after they were conquered in 1516-1570.

This last contrast raises the question: why was the turnover of Patriarchs of Constantinople so much quicker than that of their brothers of Antioch? Since in both cases the authorities were Muslims, causes other than a generalized oppression of Christians must be found.

One was the tremendous competition for office among the higher Greek clergy in the capital, with rival claimants buying the support of viziers and other officials. At times, too, Western European envoys intervened for or against a candidate. The Arabs, by contrast, often presented a united front, and European diplomats were not active in Damascus as they were in Constantinople. Moreover, there was less at stake, the Patriarch of Antioch's sphere of influence being much more limited. No doubt other reasons exist too, waiting for researchers to uncover them.

One of the focuses of myth-making which has led to much bloodshed and misery recently is Kosovo. During the long years of the Ottoman occupation of Serbia, the battle of Kosovo in 1389 came to be represented in folk epics as a mythical struggle between good and evil, Christianity and Islam, freedom and slavery. The Serbian leader, Prince Lazar, is regarded as a martyr who sacrificed himself for his faith and his people. The Serbs, characterized by the spirit of heroism and self-sacrifice, were a people in bondage, like the Israelites in Babylon, to whom God would one day give back their freedom. These folk epics were well known both among Serbs and among some other Balkan peoples, notably the Bulgarians.

Serious historians tell us a different story. The army led by Lazar in 1389 contained contingents of different origins, including Albanians; some Serbs fought on the Ottoman side. After the defeat Serbian vassal princes took part in Ottoman campaigns in Anatolia. Only in the mid-15th century were the Serbian vassal princedoms gradually eliminated; Belgrade was not captured till 1521.

The next three centuries saw a series of wars between the Ottoman and Austrian empires, often in lands populated by Serbs. The population shift from Serbs to Albanians in Kosovo set in at the end of the 17th century in this context. The Habsburg armies which had conquered Belgrade and entered Kosovo were forced to withdraw after the Ottomans reoccupied the area, and the Ottomans took reprisals against the local Christians, who had given support to the Habsburgs. To avoid Ottoman atrocities, Christians from Kosovo and surrounding areas, led by the Patriarch of Pec, followed the retreating Habsburgs and settled in what is now Voivodina. Similar emigrations followed in the early 18th century. Kosovo, now deserted, was appropriated by Albanian stock breeders who settled there permanently. This was a spontaneous movement, not government policy; the Ottomans mistrusted Albanians as undisciplined mercenaries and irregulars who committed outrages against the local population.

When in the 19th century intellectuals began to elaborate nationalist ideologies for the Serbian and other peoples of what was to become Yugoslavia, they first considered a shared language, Serbo-Croat, as the foundation of a country of liberated south Slavs. The myth of Kosovo, while alive in the folk memory, was not a source of inspiration then or for many years. The Kingdom of Yugoslavia established after the First World War, by its name implicitly excluded Albanians and other non-Slavs, and the government of Belgrade pursued a policy of settling Orthodox Serb peasants in Kosovo and forcing Albanians to emigrate or assimilate; the Serbs, moreover, received privileged treatment.

During the Second World War the Albanians reacted by collaborating with the Italian occupiers, killing and expelling Serbs and Montenegrins. After the war, to ensure Serbian support, Tito retained Kosovo within Serbia as an autonomous region, and Serbian dominance was strong until the late 1960s and 1970s, when constitutional changes enabled an Albanian leadership to emerge, enjoying many of the powers of a republic in the federal system. As a poor region Kosovo had the highest rate of unemployment in Yugoslavia, and emigration was widespread, especially among the Serbs, who were destabilized by their loss of dominance and sometimes subjected to Albanian violence.

After Tito's death Yugoslavia entered a period of profound political, social and economic crisis, with the dominance of the Communist party being questioned and religion becoming a vital part of resurgent nationalism in all the Yugoslav nations. Milosevic's speech at Kosovo Polje on the 600th anniversary of the battle with the Ottomans skillfully exploited the myth of Kosovo to save the party (and his own position as its leader) by reconverting it into a Serbian nationalist movement. It also heralded the imposition of direct rule by Belgrade, followed by years of killings, destruction and expulsions perpetrated by both Serbs and Albanians.

Had the history of Kosovo, as distinct from the myths about it, been widely known to its people, the real problems of the region - social and economic backwardness and the absence of the rule of law, as well as relations between the Albanian majority and the minorities of Rom, Turks and above all Serbs, many of whose finest mediaeval monuments are in Kosovo - might have been recognized and addressed and the subsequent bloodshed and misery avoided.

Can any historically valid generalizations be made, then, about the Orthodox experience under the Ottomans? I would tentatively suggest three points - though any generalization is unsatisfactory.

First, Muslims usually regarded Christians as inferior and did not hide the fact. Second, Christians were taxed more heavily than Muslims.

Against these two negative points there is a positive one: since Christians had a recognized, if inferior, place in the Islamic political system, they were not subjected to systematic attempts at conversion.

Some Serbs who migrated from Ottoman territory to Habsburg lands later moved back to escape Catholic missionary campaigns. And when Paul of Aleppo, traveling through the Ukraine in the mid-17th century, sees the Polish Catholic drive to convert Orthodox, he is thankful that such things do not happen in the Ottoman Empire.

How different is the history of Orthodox under the Ottomans from the history of Tatars and Caucasian and Central Asian Muslims in Tsarist Russia? Comparative study of these two subjects might show similarities, bringing out parallels in relations between religious majority and minority communities which are independent of the specific religions concerned.

A commitment to discovering historical truth also allows justice to be done to individuals who go against the dominant opinion in their community and act with wisdom or according to principles of common humanity. For instance, if the Turkish authorities were to recognize the Armenian genocide, they would not only help to heal the trauma of its survivors and their descendants, but they would also be able to celebrate the courage and humanity of the handful of Turkish officials who refused to carry out the policy and even cooperated with foreign institutions to save Armenians.

In the shared history of Orthodox and Muslims such individuals exist, too. One example is the Algerian emir Abd al-Kader, an exile in Damascus after the French crushed his resistance to their colonization of Algeria; he was instrumental in saving many Syrian Christians from death in the riots of 1860.

On the Orthodox side, a memorable role has been played recently by Archbishop Anastasios of Albania, welcoming all refugees from former Yugoslavia, whatever their religion.

In the search for truth and in Christ's service, we need to be open to these individual acts of humanity and to admit that they may come from quarters we do not expect. For in the end, it is people created in the image of God with whom we deal. There is a temptation to forget this and to see only faceless masses whom it is easy to demonize in situations of tension or conflict. By trying to discover the truth about their history, we can give them back their faces and start to recognize them as our brothers and sisters in Christ.

Hilary Kilpatrick, a longtime member of the Orthodox Peace Fellowship, is an independent scholar in Lausanne (Switzerland). Her current research is on Arabic literature of the Ottoman period.