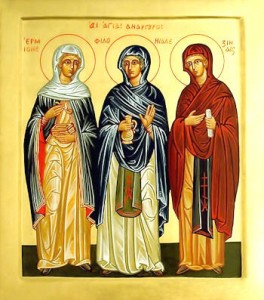 Our Fall issue as been edited in a time of crisis, indeed not one crisis but many. Wars are being fought in many places around the world, while terrorist events occur daily. Global warming is increasingly making itself felt  a news item in this issue reports on how much of the ice that once stretched from the north shore of Canada to the North Pole has melted. Finally, an economic melt-down has occurred during the last few months. Hundreds of thousands of people have lost their jobs. Factories are closing. Many more are homeless and hungry than when the last issue of In Communion went to press. Millions are living in great anxiety if not crippling fear.

Yet it is also a time of profound reflection on what has brought us to where we are, hemmed in by war, global warming, debt and economic devastation.

In an article in this issue, Alex Patico, OPF secretary in North America, makes this comment:

Will this be the century in which we reexamine the prudence of trying to maximize growth and glorify ever more extravagant con­sump­tion? Can't those who lead corporations recognize that a percentage-point raise in their compensation package often equals a poor familys annual income at bare-survival levels? That their latest superfluous acquisition ... may be a years nutrition for the child of one of their employees? Might we see a few more people eschewing the building up of what is vulnerable to moth and rust, and starting to accumulate no-expiration-date kinds of wealth, through service, caring and sacrifice?

Jill Wallerstedt writes about such service, caring and sacrifice in her account of how her own parish is responding to the hungry and homeless in their small patch of the world. It's an example, I hope, that will inspire emulation by many other parishes.

Fr. Paul Schroeder's essay about St. Basil the Great reminds us that love of neighbor was much more a hallmark of the early Church than it is of today's Church. St. Basil's voice is one to which we need to pay much more attention.

Please remember that OPF leads a hand-to-mouth existence and do what you can to help us carry on. You may do so using the donation button.

Without those who make donations, we wouldn't be able to carry on our work, not to say expand it. (For those making larger donations, 100 or more per year, as usual we offer a choice of gift books. The latest addition to the list is the just-published revised edition of Praying with Icons, expanded and with all the icons in color.)

St. Moses the Black A Patron Saint of Non-Violence By Pieter Dykhorst