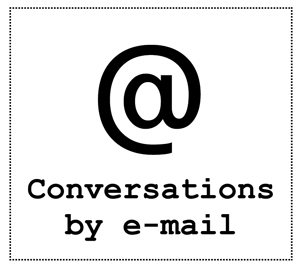 Our goals include: To practice prayer, and to focus on spiritual growth, and Christian hospitality; to honor the service we each already provide and to inspire, and teach the practice of Christian service to others; to conduct outreach through collaborative service projects and to be a catalyst for Christian service in the parish; to share success stories of Christian service among members of the parish & promote the same externally; to better understand and engage our urban environment as an opportunity to serve those in our own neighborhood; to collaborate with governmental agencies, and other churches and non-profits with similar aims as our own.

To mark the Fellowship's launching, an icon of St. Maria was placed in the narthex.

The Enemies of God: Today on the web I found myself on a blog set up by a fellow Orthodox Christian whose homepage was full of links to groups preaching the necessity of recognizing that we are in a mortal battle against "Jihadists." There were many generalizations regarding Islam in general.

After I posting some of my concerns about the page, I received a response accusing me of an "effeminatized Christianity" shaped by "political correctness." While he acknowledged that Christians are required to love and forgive our personal enemies, he said such love has nothing to do with "enemies of God." He posted a quotation attributed to St. Theodosius of the Kiev Caves: "Live in peace not only with your friends, but also with your enemies; but only with your personal enemies, and not with the enemies of God." I have no idea what this quote means. Can anyone enlighten me?

Casuistry: Your query made me think of a passage in Romans which describes all of us as "enemies of God," who have been reconciled through Christ and will be resurrected with him. The distinction between "personal enemies" and "enemies of God" sounds like poorly wrought casuistry to me.

The enemy is me: What a sad encounter! Rather, we are in a mortal battle against the passions within ourselves... I have met the enemy, and he is me (to paraphrase Pogo). It is interesting to think of using human violence against an "enemy of God." First of all, God really has no equal adversary. He is God of all, "the good, the bad, and the ugly." The cross and resurrection show one way He deals with enemies  a healing and transfiguring way for all who embrace it. God doesn't needs for us to play God. He has given us the Sermon on the Mount with its Beatitudes and called us to a ministry of reconciliation.  Sally Eckert

Not being silent: Refusing to live "at peace" with the enemies of God is not the same thing as attacking them. I've been in a number of conversations with vocal atheists (they're having their moment these days!), and have had to overcome the temptation to keep things smooth by saying nothing, failing to identify myself as a believer, or even leaving the impression that I agree. I believe that that sort of "living at peace" is simply unfaithful: "Whoever is ashamed of me and of my words, of him will the Son of Man be ashamed when he comes in his glory."

In such situations, even identifying oneself as a Christian can take a bit of courage, but sometimes it's enough to make the "enemy of God" decide to keep the peace. If he (she) decides to persist, I feel we have a responsibility to give an account of the hope that is in us, as soberly and lovingly as we can.

In this sense, I'm fully in harmony with St. Theodosius' words.

A basic tension: The greatest struggle of my life is the tension between the way the State does business and the way we are called as Christians to live. Our history is an unbroken, uncompromised legacy of competitive self-interest seeking behavior at the community, state, nation level that involves violence of every sort, at every level, and with every means to the maximum extent that the engaged entity is able. It is daunting to even imagine changing that! Who knows what it would look like to even try? I firmly believe that no state could adopt an uncompetitive, fully cooperative, unarmed posture in the world without immediately being devoured from without or overthrown from within.

The US is indeed a "peace keeper" of sorts: our economically backed military might is a coercive force for maintaining some semblance of order and stability, without which it is hard to imagine what the alternative would be. The US can no more be expected to go pacifist than a pig can be expected to fly.

But we Christians can begin to be imaginative, we can be prophetic, and we can be faithful to the Gospel call to be peacemakers and voices who call all authorities to be accountable to the Gospel. I'm coming to terms with voting being part of that prophetic responsibility, but with no confidence that the State will ever change its spots. We cannot expect to convert the State to Christ any more than we can expect to convert a horse to being a cow. But I am convinced that we Christians cannot operate as though making our nation Christian should be a goal, much less even possible. We must be faithful peacemakers despite all that. And willing to pay the price of it all.

"Pitiless" war: The idea of "pitiless" warfare is surely a redundancy. War can hardly be done in a pitying way. But the use of the word "pitiless" points up moral errors that tend to crop up in a wartime context. If a particular leader is regarded as so vile that he cannot be allowed to succeed, then (the reasoning seems to go) the war effort against him must be given no quarter. The practical implication of this is that all those who are caught up in it  lieutenants, soldiers, police forces, industrial workers, or even the common civilian population who pay taxes to his war machine become equally appropriate targets. So, we go from the "evil incarnate" target to targeting the powerless non-combatant in one swift inclusionary sweep "total war." If the bad guys hide among the good, wipe them both out and let God do the sorting. Have I got that right?

Nonviolence untried: I think we ought not be too quick in dismissing nonviolence responses on a national level as being impractical. The fact is that nonviolent alternatives have never been attempted to any great degree. Major resources have not been allocated to anything except building "better" weapons and training soldiers to kill more efficiently. It seems there is little incentive to do the hard and humbling work of building relationships with all other nations (those we like and those we don't like) that share this planet with the sense that it has intrinsic value and not simply a handle on furthering our own (selfish) interests because we can "beat anybody up if we need to."

This is where the OPF comes in for me. You all have been a tremendous resource for me, especially when I was deployed to Iraq and subsequently serving out my active duty time. I hope to continue to grow in "peace and love" with you all for years to come, Lord willing. Aaron Haney

Hard-headed realism: Using different time-scales, we can (sometimes) reason back from everyday common sense. If I were in a fight with someone and he was trying to knife me, the best option for me might not be to "go limp" as he was about to stab me. But how could I respond in a way that might allow both of us to walk away from the encounter alive and unbloodied?

Maybe I could first say "you know, you are a helluva fighter, I've got to give you that!" Then, maybe I'd add, "Ease off, let me know what it would take to let us both go home to our families." I might also say, "In a minute, I'm going to put my knife down and stop fighting  you think about whether you want to stab an unarmed guy who isn't going to fight back."

Choosing which tack to take would depend on how well I knew my opponent. The more I knew about him, the better chance I'd have of hitting the right "button" to get to him and change the dynamic.

Internationally, we are in that same situation, but on a different timescale. We are locked in a war with radical Islam and other terrorists and anarchists. But 1) how in the world did we get ourselves into this? and 2) how well do we know our opponent, to even have a clue about how to defuse the situation and get it headed in another direction?

We don't start by announcing unilateral disarmament starting next Tuesday, but we do consider how to begin a process of learning how to get our knives on the ground, and it has to be a serious one (not "you put yours down, then maybe I'll do the same").

This is realism informed by faith. Hard-headed idealism. Compassionate conservatism.

Good intentions: Violence is always a failure, and it is made much more likely by ignorance and misinterpreting what the other says and does, giving the most favorable interpretation to one's actions and the least to the other.

Unfortunately, we often seem to think that "good intentions" are sufficient to replace good information (in fact, the intentions are not necessarily too good).