In his letter to the Romans, the Apostle Paul speaks about “the law written on our hearts” which often inspires even those ignorant of the law to “do by nature what the law requires.” Yet we who know the law of love as revealed by Christ – how often do we disobey that law, turning a deaf ear to conscience?

Conscience is one of the topics in this Paschal issue of In Communion, with Alex Patico reflecting on a conference he took part in on conscience and war at which former soldiers were among those testifying. These included a friend of mine, Joshua Casteel. In his high school days, Joshua was president of the Young Republicans Club. At age 25, while working as a U.S. Army interrogator at the notorious Abu Ghraib prison in Baghdad, his faith led him to become a conscientious objector. “To take another's life is to destroy the possibility of reconciliation and redemption,” Joshua explained. He was fortunate to get a special discharge. If he had been a conscientious objector only to the Iraq War, he would now be in a military prison, as current regulations only recognize those who object to all war in principle. “Sadly enough our laws don’t allow the conscience the full scope of freedom,” says Joshua. “You can’t object to a particular war on the grounds of it being unjust. Basically, once you’ve taken the military oath, you become an indentured servant. If you follow your conscience, probably you will pay a heavy penalty.” 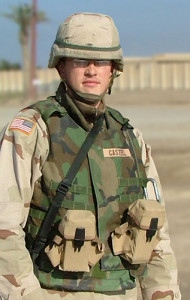 Issues of conscience enter into every area of life. Surely all of us are conscientious objectors to many things: nurses and doctors who refuse to perform abortions, shopkeepers who refuse to carry products they regard as harmful, parents who refuse to buy certain toys for their children — one could make book-length list. Yet conscience — its formation, its exercise, the price that may be paid for obeying it — is rarely discussed even in churches.

It is a subject of ongoing significance for the Orthodox Peace Fellowship.

We cannot carry on our work without your help. One way to do this is to make more than one donation per year to OPF, or give more than the minimum. (We are deeply grateful to those who manage to make monthly or quarterly donations — such help makes a huge difference.) Or you might consider giving someone — a friend? your parish priest? — a subscription to In Communion.

Thank you for whatever you can manage.