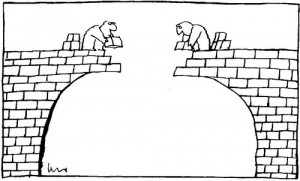 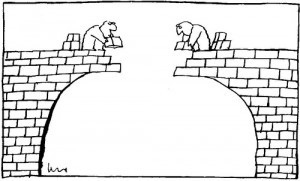 These days, we Christians have a reputation often based on our prejudices rather than our principles, our irritations with our neighbors rather than our love of neighbor. As the Orthodox columnist Terry Mattingly recently put it, Christians “are known best for what they are against.” We were once known for how well we loved one another. Not any more.

In his recent book, The Goodness of God’s Creation, Fr. Philip LeMasters says, about warfare, that we must not use the utilitarian criterion of Western culture in making life-and-death decisions. As Orthodox Christians, we must ask, “In the light of the human vocation for growth in holiness and communion with God, how should Christians respond to the prospect of warfare?” In any such cases, we must ask what the law of love commands – including in our response to the recent events in Gaza, and the ongoing conundrum of Israeli-Palestinian relations.

The situation can, admittedly, be confusing. Labels often obfuscate: “Israeli” can be taken to mean citizens of the State of Israel (Jews, Arabs and others), or the government of Israel. Sometimes it is blurred to include supporters in other parts of the world. The term “Palestinians” can be used to mean “those who were born in Palestine” (whether in what is now Israel, on the West Bank, in Gaza, or wherever they now live); or it can mean “leaders of the Palestinian government” (including or excluding Hamas), or those who live in the occupied territories Muslim, Christian or something else).

The law of love leads us out of such briar patches of nomenclature. Whatever labels may be put on us, we are all brothers and sisters. While Paul was referring to the Church when he said “there is neither Jew nor Greek, slave nor free man, male nor female,” whom can we place beyond the pale?

To heal the region, we must first put aside political divisions and historical Gordian knots, to recognize the basic human nature of the antagonists with all their needs and aspirations.

What is an Israeli Jew? A person with ties of blood to this region. A person with a rich tradition of searching and scholarship about how to treat fellow inhabitants of this earth. One with a special sense of connection to those who have been ostracized, oppressed or eliminated in many places and many times. A person who lives in some degree of fear.

We Christians should be able to empathize with the anguish of Jews who never envisioned the State of Israel becoming an occupying force. After all, we went through the mixed blessing of having the Emperor Constantine embrace our faith, conflating temporal dominion with divine kingdom. We saw bloody crusades launched in the name of Christ, and the blasphemy of believers remaining quiet when their countrymen rounded up Jews, dissidents and the “defective.”
We can empathize with Palestinians excluded from their homes and homeland, stripped of human rights, punished as a people for the actions of a minority, with no power over their lives. We too have known, and still know, persecution (under the Ottomans, under Communism and in India today). We have picked up the rock – and the rocket – when we thought our lives depended on it.

There is no crime seen in this situation, of omission or commission, which has not been committed by those who called themselves Christians. So how, with our own blood-stained past, can we be helpful? We can – in just the way Our Lord specified – by showing our capacity to love.

We must remember the words of Dr. King, who said that the church “must be the guide and critic of the state, and never its tool. If the church does not recapture its prophetic zeal, it will become an irrelevant social club without moral or spiritual authority. ... But if the church ... will speak and act fearlessly and insistently in terms of justice and peace, it will enkindle the imagination of humankind and fire the souls of the people.”

Loving all the participants in this ghastly, perpetual drama of strike and counter-strike, intifada and walls, checkpoints and bus-bombings, means refusing to take sides. Refusing to sell armaments. Refusing to justify what cannot be justified, whether high-tech or low-tech, whether done out of desperation, preemption or revenge.

Positively, it means being willing to share our own experience, expertise and wealth, to reconcile the mortal enemies, and make the desert of Jewish and Arab hearts bloom. These are not easy things to do. But protesting the actions of others has always been easier than doing something constructive and redemptive ourselves.    ❖

Alexander Patico coordinates activities of OPF in North America. He has written previously for In Communion and authored a forthcoming book on U.S.-Iran relations.