Above: Not your usual Orthodox Christian gathering: Daniel Spiro, left, and Haytham Younis

An imam, a priest and a rabbi walk into a bar, and the bartender says, “What is this? A joke?” It’s not often you see Muslims, Christians and Jews in conversation. But at the 2010 Orthodox Peace Fellowship North America Conference, representatives of the three Abrahamic faiths talked together, laughed together, broke bread together and discussed the challenges of interfaith dialogue in today’s fear-charged world. The conference was held the first three days of October at St. Paul Greek Orthodox Church in Irvine, California.

The stage was set Friday evening by keynote speaker Dr. Ben Campbell Johnson, executive director of the Institute of Church Renewal and the author of more than a dozen books, including Beyond 9/11: Christians and Muslims Together: An Invitation to Conversation. Johnson, a former evangelical, taught at Columbia Theological Seminary from 1981 to 2000. “Nothing in my life,” he said, “would have predicted that someday I would be standing here [at an interfaith event hosted by Orthodox Christians].”

At the age of 75, Johnson had an epiphany. He realized that the 21st century would be all about Christians and Muslims “and I didn’t know anything about Islam.” After reading and research on Islam, he found himself sitting across from a Muslim woman having a heart-to-heart conversation. He thought to himself, “This woman believes in the same God that I do. I began to see the world differently.”

Johnson admitted that for most of his life, he had been afraid of engaging people of faiths other than his own variety of Protestant Christianity. But the more he learned about different religions, and the more time he spent with people of other faiths, the deeper his own faith became.

Above: “I'd Like to Buy an Enemy” – Ted Swartz on the right

After dinner in the parish hall, the conference participants gathered for some comic relief from Ted & Company Theaterworks. Ted Swartz, a Mennonite, had planned to become a pastor, but fell in love with theater in college and has been performing ever since. His satiric play, “I’d Like to Buy an Enemy,” exposed the ironies of American society as it relates to peace, justice, and fear. “War is such an eclectic endeavor,” he sighs with a smile. “Sooner or later you get to play it with everybody.”

Ms. Jahan Stanizai, a Muslim who is president the Interfaith Alliance in Culver City, then participated in a community dialogue with Fr. John-Brian Paprock, of Holy Transfiguration Orthodox Church, Madison, Wisconsin, and creator of Wisconsin’s Interfaith Awareness Week, now in its 12th year.

Stanizai is from Afghanistan – the “old” Afghanistan, before most of the country was seized by extremists. “We were a secular country that was 99 percent Muslim,” she said. “We were the Switzerland of Asia. We had women in power, we had excellent education. Now they say you can’t find a wall more than a foot high without a bullet hole in it.” As a result of the current power structure and the war, she says, “many opportunities have been lost. Educated people are under attack – killed, imprisoned or have left the country. Afghanistan has lost a generation.”

Stanizai, a psychotherapist who works in family therapy, senses peoples’ discomfort when they find out she is a Muslim. “People hold back. I can see their reaction,” she said.“I learned more about my religion in the US than I did in my own country. I analyzed the Koran here and I see how many Muslim cultures are wrong. [But hatred] is contradictory to the Koran.” 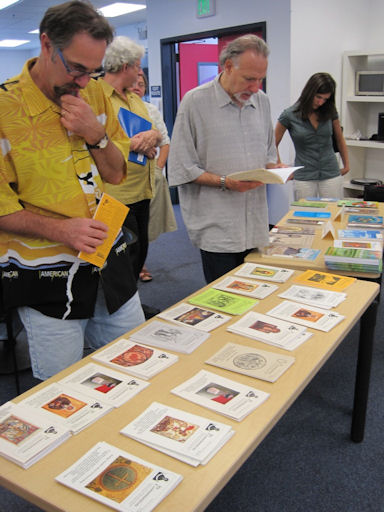 Fr. John-Brian Paprock, a priest and hospital chaplain, said he deals with interfaith issues all the time, especially at the hospital, where more than 90 percent of the people he sees are non-Orthodox. While serving in the Madison Urban Ministry, involved in issues such as homelessness, he worked with an all-white group of clergy. “We were talking about race relations and I thought, ‘There’s a problem here,’” he said. But when the group became more diverse, conflict arose – not between people of different races, but between people of different religions: specifically a Baptist and a member of the Nation of Islam (both African-Americans). “I realized the biggest issue we deal with is not race, but faith,” he said. Dealing with interfaith issues can be uncomfortable, “but it’s the struggle. When you are most uncomfortable, that is when you meet God.”

Like others at the conference, Paprock noted that, in becoming more involved in interfaith dialogue, “I’ve gone deeper into my own faith. And I realized that God is bigger than all religions. God doesn’t need religion; we do. God allows us to be separate.”

The author of several books, including Neighbors, Strangers and Everyone Else, Paprock believes that Orthodox Christians “can honor the goodness in others even if those others are deceived.… I do not believe there is more than the one Way to get to the Father. At the same time, we cannot judge anyone outside of our own community – for they may have a relationship with God we may not fathom.”

After lunch and into the evening, conference participants watched three films.

Arranged tells the story of the friendship between an Orthodox Jewish woman her Muslim colleague, both new teachers at a Brooklyn school. The young women both respect their family traditions, which include arranged marriage, but must also deal with modern frustrations.

The second film, Out of Cordoba, is about inter-religious harmony in the ancient Spanish city of Cordoba. Director Jacob Bender attended the conference to comment on the film. The film takes Bender, an American Jew, on a post 9-11 journey to Spain, Morocco, France, Italy, Egypt, Palestine, and Israel. He found that conflict between Judaism and Islam is not inevitable.

Ruth Broyde Sharone presented God and Allah Need to Talk. Sharone is a film maker, interfaith pro-activist, community organizer and motivational speaker. The film portrays both the Islamic Center of Southern California, which welcomes visitors of other faiths, and Temple Kol Tikvah, which holds an annual Muslim-Jewish Seder of Reconciliation. Before and after the film, Persian singer Mamak Khadem performed some haunting melodies with Israeli musician Yuval Ron.

The conference presented all the participants with an amazing opportunity to live the biblical text: “When a stranger sojourns with you in your land, you shall not do him wrong. The stranger who sojourns with you shall be to you as the native among you, and you shall love him as yourself; for you were strangers in the land of Egypt.” [Leviticus 19:33-34]

Teresa Peneguy Paprock is a writer and a member of the Orthodox Peace Fellowship. She is married to Fr. John-Brian Paprock of Holy Transfiguration Orthodox Church, Madison, Wisconsin. Next years’s OPF conference, on the theme of forgiveness, will be held in Madison.