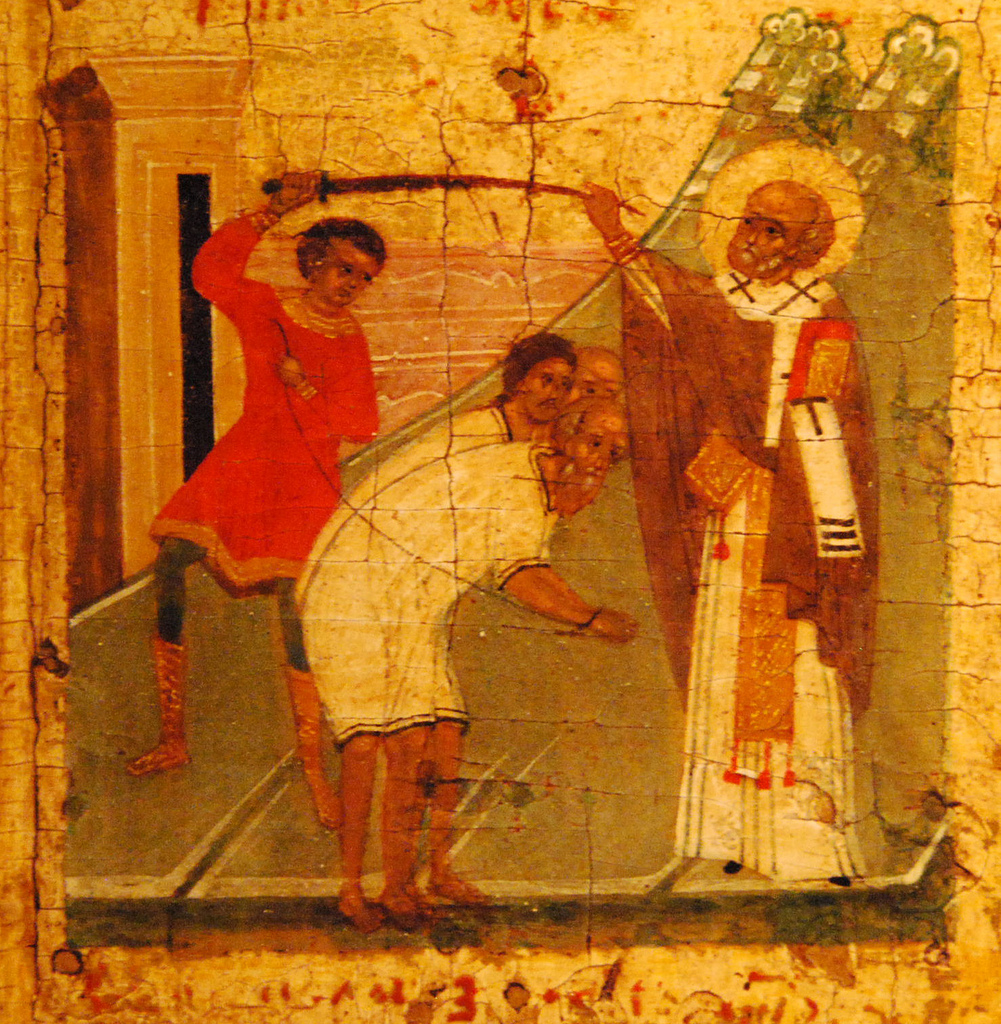 Saint Nicholas wrote no books nor have any of his sermons or letters survived, but few saints have been the object of such universal affection. He is the patron of prisoners, seafarers and orphans.

Born in Asia Minor about 280, he was the only child of wealthy parents who arranged for their son to receive a Christian education from his uncle, the bishop of Patara. Taking literally the words of the Gospel, when his parents died, he distributed their property to the poor, keeping nothing for himself. Though drawn to monastic life, he felt led by God’s will to serve as a priest in the world. After his ordination, he was chosen as archbishop of Myra. During the persecutions of Diocletian and Maximian at the end of the third century, Nicholas was among the many thousands imprisoned and tortured.

Over the centuries, Nicholas’s life was embroidered with many legends, yet there are several stories about him which seem solidly historical. One of these relates how, while Nicholas was visiting a remote part of his diocese, several citizens from Myra came to him with urgent news: the ruler of the city, Eustathios, had condemned three innocent men to death. Nicholas set out immediately for home. Reaching the city outskirts, he asked those he met on the road if they had news of the prisoners. Informed that their execution was to be carried out that morning, he hurried to the executioner’s field where he found the three men kneeling with their arms bound, awaiting the fatal blow. Nicholas passed through the surrounding crowd, took the sword from the executioner’s hands and threw it to the ground, then ordered that the condemned men be freed. His authority was such that the executioner left his sword where it fell. Eustathios later confessed his sin. Nicholas absolved him, but only after the ruler had undergone a period of repentance.

Nicholas was one of the bishops participating in the First Ecumenical Council at Nicea in 325 where, according to legend, he was so angered by the heretic Arius, who denied that Jesus was the Son of God, that he struck him on the face. For his violent act, he was briefly excluded from the Council.

Tireless in his care of people in trouble or need, he was regarded as a saint even during his lifetime. At times, it is said, his face shone like the sun.

He died on December 6, 343 and was buried in Myra’s cathedral. In the eleventh century, his relics were brought to Bari, Italy, where they remain.

The icon detail is a panel from the border of a large St Nicholas icon, probably painted in Moscow, dated early 16th century, now in the collection of The Hermitage, St Petersburg.