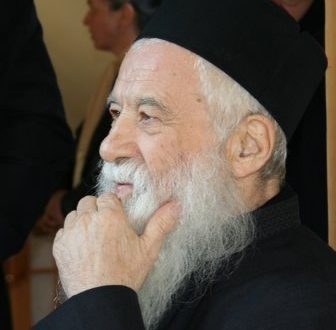 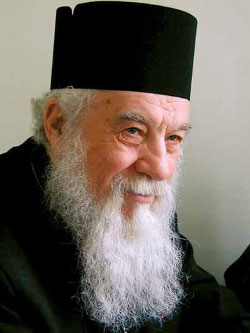 They buried my spiritual father last November. I have never seen a body in a casket look so not-there; the indistinct pale husk he left behind looked like something a breeze could lift up and carry away. It was the contrast, I suppose. Few people in life are as radiant and vigorous as Fr. George Calciu, or as full of joy. He was a few days short of his 81st birthday, still full-time pastor of a church in the suburbs of Washington, DC, still traveling world-wide to those who sought him as a teacher and spiritual father, still diligently reaching out to the poor and unchurched around him.

Fr. George's radiance was a lasting rebuke to the darkest intentions of torturers. In his native Romania he was imprisoned twice by the Communist authorities, for a total of 21 years. He was a survivor of the brief but appalling "Pitesti Experiment," the most intensive program of brainwashing to take place.

The plan at the prison in the Romanian city of Pitesti was to take promising young men, 18 to 25 years old, and utterly break them down, then rebuild them into the ideal "Communist man." In the book Christ is Calling You! (St. Herman Press, 1997), Fr. George explained to an interviewer that the Pitesti experiment involved several distinct steps.

Incoming prisoners would be handed over to a team of guards and experienced prisoners, who would beat them and kill one or two, whoever appeared to be a leader. Then the "unmaskings" began, in which prisoners were required under torture to renounce everything they believed. Fr. George recalled being compelled to say, for example, "I lied when I said 'I believe in God.' I lied when I said, 'I love my mother and my father'." This was extremely painful, as it was designed to be. The intention was to undermine the prisoner's memory and personality, to infiltrate his consciousness with lies until he came to believe them.

A few months ago I was able to talk with another survivor of Pitesti, Fr. Roman Braga, when I visited the Michigan convent where he now is in residence. The Communists had arrested Fr. Roman on an inventive charge: he was accused of trying to overthrow the government by discussing the writings of St. Basil the Great, St. John Climacus, and St. Gregory of Nyssa. He spent his first year in solitary confinement. In the dark, narrow cell, he could not tell one season from another, nor could he look out the small, high window and see a horizon. "You had to go somewhere; you had to find an inner perspective," he said, "because otherwise you would truly go crazy."

Fr. Roman told me that religious beliefs were particularly mocked. Tormenters would set obscene lyrics to the tunes of familiar hymns, and celebrate parody liturgies designed to break believers' hearts. His sole clue that Christmas or Pascha (Easter) might be near would be the appearance of their themes in the torturers' arsenal.

One way guards particularly taunted Christians was by telling them that Christ and Mary Magdalene had had a sexual relationship. Fr. Roman noted, laughing, that in Romania this constituted torture, but in America people line up to pay for it in movies and books.

Neither man would describe what they'd endured. "It is secret, intimate," Fr. Roman said, "I saw saints fall, and I saw the simple rise and become saints." Fr. George admitted that he gave way under torture. When a victim is out of his mind with pain, he doesn't know what he is saying. Fr. George told his interviewer, "It was a spiritual fight, between good spirits and evil spirits. And we failed on the field of battle; we failed, many of us, because it was beyond our ability to resist ... The limit of the human soul's resistance was tried there by the devil."

This emotional and spiritual damage was even worse than the physical pain. Fr. George went on, "When you were tortured, after one or two hours of suffering, the pain would not be so strong. But after denying God and knowing yourself to be a blasphemer - that was the pain that lasted ... We forgive the torturers. But it is very difficult to forgive ourselves." At night a wash of tears would come, and with it, returning prayer. "You knew very well that the next day you would again say something against God. But a few moments in the night, when you started to cry and to pray to God to forgive you and help you, was very good."

Fr. George once attempted to write a memoir of his Pitesti experience, but found it impossible: "Sometimes I was hammering at one word, timidly, then persistently, then intensely, to madness. The word became nothing other than a sequence of letters or sounds. It had no meaning. It didn't tell me anything. I would say: 'beating' or 'pain' or 'prayer' or 'curse' ... and I would substitute one for another without any change; none told me anything! I would say 'cell' and the word would not speak. I could say instead 'lelc' or 'clel' or 'ellc' with the same result. Everything was mute and absurd.

"And suddenly a curse from that time would resound in my mind, or a song somebody sang during the unmaskings, and the whole atmosphere would install itself with a painfully striking character and with a reality more real than it was then. Affective memory! Proust was a genius in his intuitions, a part of the literature he wrote."

Yet the worst was still to come. In order to demonstrate that they had truly become "the Communist man," in order to fully embody the persona demanded of them, these mentally and physically battered prisoners were required to become torturers. They were compelled to assist in the "re-education" of new prisoners, and any reluctance or leniency was cruelly punished.

"This was the most difficult part," Fr. George said, "for under terror and torture one can say, 'yes, yes, yes.' But now, to have to act? It was very difficult. It was during this part that the majority of us tried to kill ourselves." In his case, "I was on a big staircase, three stories high. The moment I tried to climb over it to throw myself down, a friend of mine caught me and saved me."

It may sound surprising that being a torturer was so much more painful and soul-destroying than being a victim. Yet the pattern holds in other realms. In her book, Perpetration-Induced Traumatic Stress (Praeger, 2002), Rachel MacNair examines a number of situations in which a person may be more distraught over harming someone - even if it's socially sanctioned or in self-defense - than by being harmed personally. This sounds reasonable enough in the case of a policeman who kills someone in the line of duty, or of the person whose sad role it is to carry out a death sentence.

Yet even soldiers, who have been trained to kill and may well be themselves in mortal danger, can feel great distress about the violence they do to others. In "The Price of Valor" (The New Yorker, July 12 & 19, 2004), Dan Baum examines this puzzle. He spent a week with amputees at the Walter Reed Army Medical Center and "was struck by how easily they could tell the stories of the horrible things that had happened to them. They could talk about having their arms or legs blown off in vivid detail, and even joke about it, but, as soon as the subject changed to the killing they'd done, a pall would settle over them." When he asked a Vietnam vet how often he experienced flashbacks of killing villagers, he first said, "Every ten minutes," but then corrected himself: "Really, it's more like I'm always looking at a double image."

The Army's textbook for the medical corps, War Psychiatry, notes that "casualties the soldier inflicted himself on enemy soldiers were usually described as the most stressful events" and quotes a company commander that it is easier for a soldier to accept the death of a friend than to cope with the fact of having shot someone.

MacNair considers evidence for Perpetration-Induced Traumatic Stress among a number of groups - soldiers, executioners, police, criminals, and abortion providers - and presents some unusual information about the Nazi "Einsatzgruppen." These were the soldiers who were charged with shooting Jews lined up at the edge of a pit - an act of unspeakable callousness. But, from the perspective of Nazi efficiency standards, the soldiers weren't able to be callous enough. Because they shot their victims in the back they were spared the memory of the victims' faces, yet found their nightmares haunted by those vulnerable, individual necks. Adolf Eichmann wrote that many of them, "unable to endure wading through blood any longer, had committed suicide. Some had even gone mad. Most of the members of these Kommandos had to rely on alcohol."

When Heinrich Himmler observed a shooting squad in action, it disturbed him so much that he ordered a "more humane" approach be found; the result was the gas chambers, which allowed the killer to avoid seeing his victims die. An officer in charge of the Einsatzgruppen, von dem Bach-Zelewski (who would himself later succumb to hallucinations), insisted to Himmler, "Look at the eyes of the men in this Kommando, how deeply shaken they are! These men are finished for the rest of their lives."

The torture he endured did not "finish" Fr. George; it made him courageous enough to defy the authorities, and even accept a second term of imprisonment as the price of preaching the gospel. Fr. Roman says that, in fact, his time in prison brought him an unexpected blessing, because it was there that he first discovered the depths of prayer. "I was forced to find myself in prison," he writes in his book, Exploring the Inner Universe (HDM Press, 1996). "Only then was I able to discover how beautiful the interior life of man is ... We will never reach the same spiritual level of life as in Communist imprisonment."

I asked Fr. Roman whether he was able to forgive his torturers. "Those who suffer much, forgive," he said. "Those who do not forgive become victims. I embraced my torturers, once I saw that they were controlled by the devil. The devil is real, not a bedtime story."

That would be one piece of the puzzle which Orthodox Christians would bring to a discussion of torture. We still believe in a real devil. Not a pitchfork-and-tail cartoon, but a vicious malevolence who gorges on human suffering. The person who feels an inner compulsion to acts of sadism is not being driven by human nature.

As Fr. Roman concluded, "Man is a sacrament; he is a mystery, too. We do not know what we are."

Frederica Mathewes-Green is the khouria of Holy Cross Antiochian Orthodox Church in Linthicum, Maryland. She is a columnist and movie reviewer, and author of several books, including most recently, The Lost Gospel of Mary: The Mother of Jesus in Three Ancient Texts (Paraclete Press). Her essay is reprinted with the author's permission from The Review of Faith & International Affairs.