Father David Kirk died on May 23 at the age of 72. His life was dedicated to the service of the poor and to racial justice. He was, at his request, buried near Dorothy Day, who had been his great teacher. 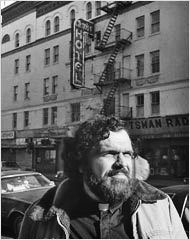 I met him when we worked together on a book. He approached Templegate, my father's publishing company, with the idea of a book to be called Quotations from Chairman Jesus. The title will tell you that this was in the late sixties, when Mao's little red book was all the rage with campus radicals. I was the book's editor, and Fr. David came to Springfield, Illinois for a few days and we got the book out in fairly short order. It was a selection from scripture and the Fathers and other sources, with an emphasis on the radical nature of Christian belief. Daniel Berrigan did the introduction, and In Communion readers may be interested to know that the dedication was to Jim Forest, then in prison for anti-war activities.

From the time I met him Fr. David, a Melkite Catholic at the time, was drawn to Orthodoxy. He suggested, knowing my own interest, that I read Bulgakov and Lev Gillet. In 2004, after years of circling the decision, he joined the Orthodox Church in America.

During the many conversations we had toward the end of his life, he was very concerned that Emmaus House, the ministry he founded, should continue as an Orthodox ministry.

He was born in Mississippi into a poor farming family. He grew up near black people and his playmates were black until that time in early adolescence when white Southern children were told that they could no longer hang out with black children, and this bothered him deeply.

He used his position as editor of his high school newspaper to attend a black high school for a month, explaining to school authorities that he wanted to do an article on the education of black youth. His real purpose was to see how it was to live black in the segregated South. The experience, he often said, radicalized him.

Later David moved to New York and got involved in the Catholic Worker movement, received a Master's Degree from Columbia, and returned to the South. After his ordination as a Melkite priest, he ran into trouble with a Roman Catholic bishop who was bothered by his desire for interracial fellowship. He wrote to Dorothy Day about this, and she answered with a note to the effect that you don't need permission to do good - the Gospel gives it to you.

He returned to New York and wanted to start a house for the homeless on the lower East Side. Dorothy Day told him the need was greater in Harlem. He went there and, with others, founded Emmaus House, which over the years from the mid-sixties until today has been a community of homeless men and women who serve the homeless.

All of those who live at Emmaus must get the counseling they need, take some responsibility for their education, and do work to help sustain the community.

During his long final illness some of Emmaus' activities were cut back, and donations fell off. His kidney failure and many other physical ills drained his energy, and he was very concerned about finding a successor. He was aware that in whatever time that was left to him he could do little more than suggest future courses of action.

Emmaus' board met recently, and Albert and Julia Raboteau were elected co-chairs. The Emmaus community is determined to continue the work. I am on the board, and will be going regularly to Emmaus for a weekly Vespers service.

Emmaus needs money for its continuing operation, but also - most importantly - a director, someone willing, like Father David, to share the life of the poor.

If you are willing to consider this, please do - and in the meantime, pray for the Emmaus Community, and pray that we find someone willing to take up the important work that Father David started.

Interested in helping the work of Fr. David and the Emmaus Community continue? Please contact Fr. John Garvey at: