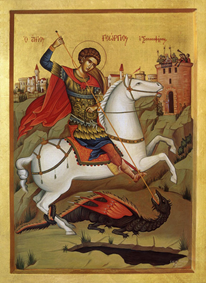 True stories become streamlined into legends and legends are compressed via symbols into myths.

The real Saint George never saw a dragon nor did he rescue a princess in distress. We are not even sure he had a horse or possessed a lance or sword. It is even possible he was a farmer. The name “George” means tiller of the soil. For this reason Saint George is a patron saint of agriculture, herds, flocks and shepherds.

A Christian convert who was born late in the third century after Christ and died early in the fourth century, Saint George was one among many martyrs of the early Church. What made him a saint among saints was the completely fearless manner in which he proclaimed his faith during a period of fierce persecution when many other Christians were hoping not to be noticed. According to one ancient account, George went to a public square and announced, “All the gentile gods are devils. My God made the heavens and is the true God.” For this he was arrested, tortured and beheaded in the town of Nicomedia (in the northwest of modern Turkey). His courageous witness led to the conversion of many and gave renewed courage to others already baptized. The probable date of his martyrdom was April 23, 303. His body was brought to his birthplace, Diospolis, later known as Lydda (and today as Lod in what has become Israel).

Saint George was one of the early victims of the anti-Christian persecution ordered by the Emperor Diocletian that began in February 303. Churches were destroyed and biblical texts burned. All Roman subjects were ordered to make ritual sacrifices to Rome’s gods. Those who refused risked severe punishment. Many were sent into exile as slave laborers in quarries and mines in Egypt and Palestine. Thousands were tortured and many executed. The attack finally ended in 311. With Diocletian in retirement and the emperor Galerius ill and close to death, Galerius published an edict of toleration allowing Christians to restore their places of worship and to worship in their own way without interference, provided they did nothing to disturb the peace.

Persecution ended, but the memory of those eight years of suffering would never be forgotten. George was one of the saints whose witness remained fresh. His icon hung in more and more churches. As centuries passed, he became patron saint not only of many churches and monasteries but of cities and whole countries.

In icons made in the centuries before the legend of the dragon became attached to George’s name, we see him dressed as a soldier and holding the cross of martyrdom.

Perhaps he was in the army, but it may be that George is shown in military gear because he so perfectly exemplifies the qualities that Saint Paul spoke of in his letter to the Ephesians in which he calls on Christ’s followers to wear the helmet of salvation and the armor of righteousness, to be girded with truth, to clad their feet in the Gospel of peace, to possess the sword of the Spirit which is the word of God, and to protect themselves from the devil’s flaming arrows with the shield of faith.

Such symbolic use of a soldier’s equipment of war does not rule out the possibility that George was a soldier. People from every class and profession were drawn to the Gospel, soldiers among them. George may have been one of these.

It was only in later centuries that the dragon legend emerged. It has been told in many variations, but in its most popular form it concerns a dragon living in a lake who was worshiped by the unbaptized local people who, in their fear, sacrificed their children to appease the creature. Finally it was the turn of the king’s daughter, Elizabeth, to be sacrificed. While she was going toward the dragon to meet her doom, George appeared riding a white horse. He prayed to the Father, Son and Holy Spirit, then transfixed the dragon with his lance. Afterward Elizabeth led the vanquished creature into the city.

According to the Legenda Aurea written by Blessed James de Voragine about 1260, the wounded monster followed Elizabeth “as if it had been a meek beast and debonair.” Refusing a reward of treasure, George called on the local people to be baptized. The king agreed, also promising to maintain churches, honor the clergy, faithfully attend religious services and show compassion to the poor.

From the point of view of journalism, the dragon story is a literary invention. Yet when you think about it, what better way to symbolize the evil that George actually confronted and defeated than to portray it in the form of a fire-breathing dragon? George fought and was victorious over an adversary which enslaved and terrified most of the people of his time.

The white horse George rides in the icon, a graceful creature as light as air and as fearless as his rider, represents the courage God gave to George as he faced the power of death. It is the courage God gives to any Christian facing martyrdom.

In many versions of the icon, the lance George holds is shown resting lightly in his open hand, meaning that it is the power of God, not the power of man, that overcomes evil.

Notice how thin the lance is and that, in many Saint George icons, there is a small cross at the top of the lance. The icon stresses that it is not with weapons of war that evil is overcome but with the power of the Cross, the life-giving Cross that opens the path to the resurrection.

Similarly, George’s face shows not a trace of anger, hatred or anxiety. His tranquil face reminds us of Christ’s commandment that, even in conflict, his followers must love their enemies.

In many versions of the icon, the hand of the Savior is extended from heaven in a sign of blessing. This detail is

a reminder that whatever we do bears good fruit only if it is God’s will and has God’s blessing.

In more detailed versions of the icon there are scenes before and after the battle with the dragon. Sometimes a castle is in the background from which Elizabeth’s royal parents watch all that happens.

Following George’s victory, icons sometimes show Elizabeth leading the wounded dragon on a leash made of her belt – a victory of life over death similar to Christ’s resurrection.

Bringing a wounded but still living dragon back to the town provides us with a powerful image of the conversion rather than the destruction of enemies. The final fruit of George’s combat with the dragon is not victory over a monster nor financial reward for successful combat but bringing unbelieving people to conversion and baptism.

Finally, as is the case with any icon, the Saint George icon is not a decoration but is intended to be a place of prayer. It belongs in the icon corner of any home where courage is sought – courage to be a faithful disciple of Christ; courage to fight rather than flee from whatever dragons we meet in life; courage to prefer the conversion rather than the death of our adversaries;  courage to live in such a way that others may be made more aware of Christ and the life he offers to us. ❖

This text is drawn from the afterword of a new children’s book, Saint George and the Dragon, due out in September from St. Vladimir’s Seminary Press. Jim Forest is international secretary of the Orthodox Peace Fellowship. His most recent book is All Is Grace: A Biography of Dorothy Day.