It is urgent for Orthodox Christians to recognize the terrible truth of March 10, 1946 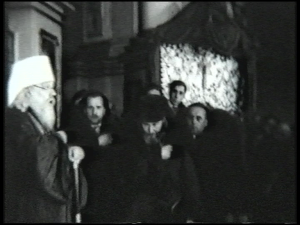 One of the bishops at the pseudo council of 1946 in the St George cathedral, Lviv.

On March 10, 1946, at Lviv, the Orthodox Church of Russia, under pressure from the Soviet government, forcefully integrated the Ukrainian Greek Catholic Church and claimed jurisdiction over it. When the participants in the synod on March 8 and 9, voted for the “reunification” of their Church with the Patriarchate of Moscow, all the Ukrainian Greek Catholic bishops were behind bars in prisons. The 216 priests and 19 laymen, assembled in the Cathedral of Saint George in Lviv by the NKVD, the ancestor of the KGB, were at the mercy of a “group of initiative” led by two Orthodox bishops, Antony Pelvetsky and Myhailo Melnyk, and an orthodox priest Gavril Kostelnyk. The archives reveal that it was Stalin himself who decided to eliminate the Ukrainian Greek Catholic Church in February 1945, twelve days after the Conference of Yalta with Winston Churchill and Franklin D. Roosevelt.

Fr Gavril Kostelnyk, one of the organizers of the Lviv pseudo synod

All serious historians and theologians have no doubts that the 8-10 March 1946 synod of the Ukrainian Greek Catholic Church at Lviv was only a sham. Bohdan Bociurkiw, who was a professor of history at Carleton University in Ottawa, wrote a comprehensive survey on this matter and it has never been contradicted. Pope Benedict XVI spoke of it in 2006, referring to it as a “pseudo-synod” which “seriously harmed Church unity”. Nicolas Lossky, a French Orthodox theologian who is a member of the Patriarchate of Moscow, also recognized that this was a false synod. Because of its suppression in 1946 and until 1989, the Ukrainian Greek Catholic Church, which counted more than 5 million adherents, became, in fact, both the principle victim and the principle force of opposition, within the borders of the USSR, to the Soviet regime. Thus we make an appeal to the present day Orthodox authorities in Russia and Ukraine and elsewhere, to recognize the invalidity of the tragic decisions of the council of Lviv.

The Orthodox Church of Russia as a whole cannot be held responsible for decisions taken by ecclesiastical authorities who were manipulated or terrorized by the NKVD-KGB. However we, as Orthodox Christians, living 70 years after the events, feel responsible for the culpable silence surrounding the destruction of this Church by the Soviet regime with the participation of the Patriarchate of Moscow. We know that millions of Orthodox Christians in the world firmly condemn the anti-religious persecutions of the Soviet government and of Joseph Djougachvili in particular.

Thus, on this commemorative day of March 10 1946 and on the eve of Sunday, March 13, 2016, Sunday of the Great Pardon in the Orthodox liturgical calendar, we assure the Ukrainian Greek Catholic Church of our solidarity, of our prayers for all the innocent victims of this Church who were imprisoned, tortured, deported and assassinated by the Soviet government with the complicity of the Patriarchate of Moscow. We humbly ask their pardon for all the injustices they have suffered under the cover of the Orthodox Church and we bow down before the martyrs of this Ukrainian Greek Catholic Church.

For additional background, see the film “To Understand and to Forgive”: