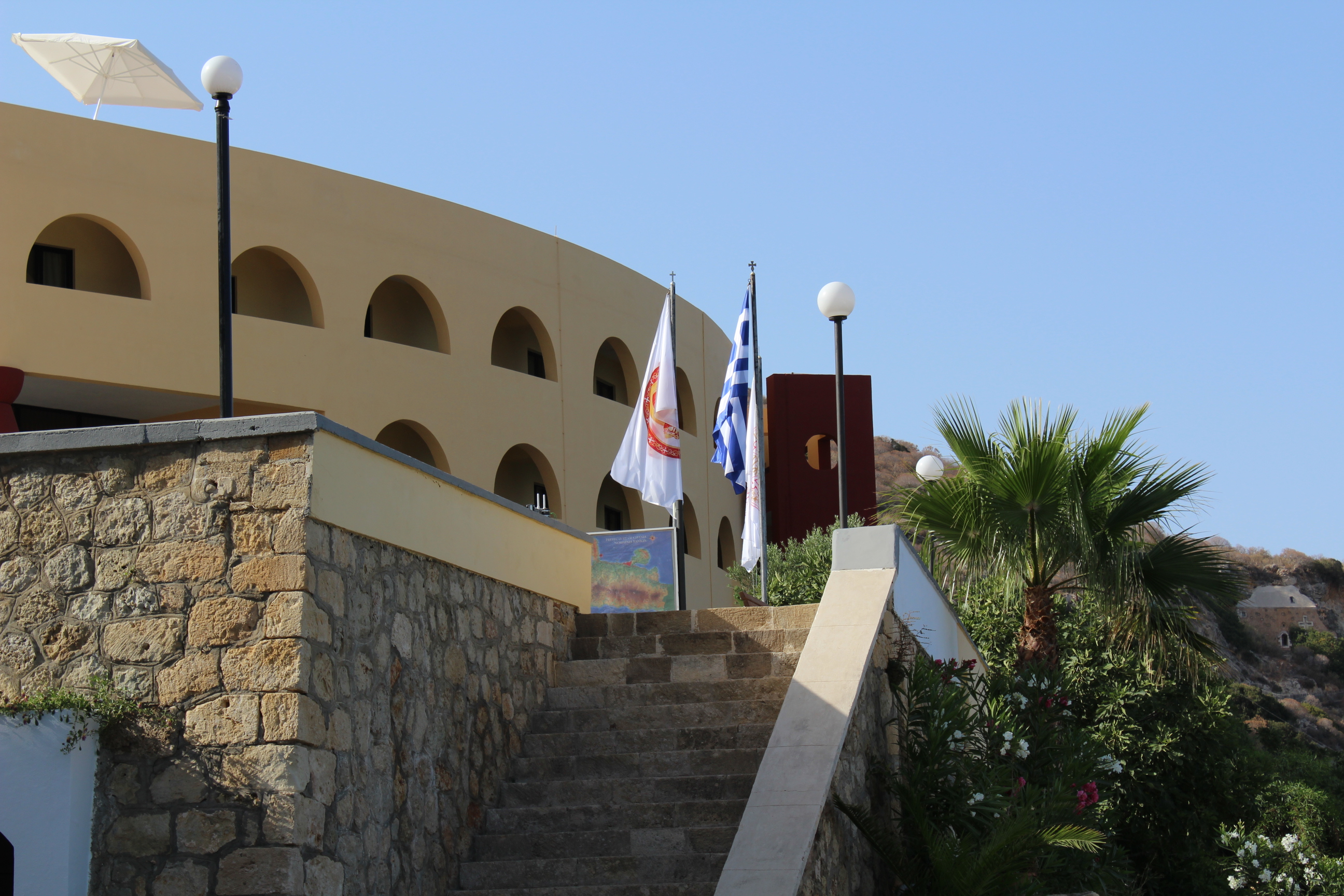 Today my response to "The Mission of the Orthodox Church in Today's World" was published on Public Orthodoxy, the blog of Fordham's Orthodox Christian Studies center. You can find it here. I'm also posting the text below, and you can find an expanded version posted on our own website.

The Mission document is monumental for its statements on war and peace. Warfare and nuclear weapons are unequivocally condemned, without qualification, as an expression and fruit of sin. What strikes me about all of this is that I haven't been able to find any discussions of these aspects of the document anywhere. From what has been released regarding the minutes of the Council, the discussion of this text centered entirely on the proposals of the Church of Greece about the use of the word 'prosopon' (person) and against religious syncretism. The war and peace sections were not discussed. That means they passed exactly as they were formulated at the pre-conciliar consultations, where this document was signed by all 14 patriarchates, and not just the 10 who have shown up. None of the 4 absent patriarchates cited the sections on war and peace as problematic. So as far as I can tell they are not controversial.

Even those outside the Council aren't talking about these sections, as far as I can tell. I haven't been able to find any other articles or commentaries on these sections. They are literally unremarkable, in that no one is making any remarks.

I find this silence remarkable, given how groundbreaking this document is for the Church. The highest level of Church authority has unequivocally condemned nuclear weapons and warfare, and has issued a call for Orthodox peacemaking, and for Orthodox cooperation with and involvement in organizations that promote peace.

There are some very radical consequences to these statement. Will the Orthodox Church lead the push for nuclear disarmament? Will Russia give up its nuclear weapons? Will peaceful opposition to warfare become the new norm for Orthodox Christians around the world?

War and peace issues, apart from the document, are being discussed quite regularly at the Council. Nationalism has been condemned many times by the bishops present, a statement was made about the attack on the Syriac patriarchate, and terrorism has come up several times at the press briefings. Territorial disputes are also on everyone's mind. The last two days, the issue of the 'New Lands' between the EP and Greece has been all ablaze. Similarly, today at the press briefing, the Serbian and Romanian spokesmen were asked about the dispute between those patriarchates. This Council has been a voice for peace on most of these accounts. As special meeting was set up between the Serbian and Romanian patriarchate this evening, to discuss the issue in a spirit of humility and conciliarity. Thankfully, the atmosphere among the bishops and delegates is very open, direct, humble, and brotherly.

At the press conference today, it was suggested that this Mission document may be signed today, if so then it has already been signed. But it was also said that there are nearly 300 bishops signing these documents, and they sign them in all the official languages of the Council. During the press conference, the signing of the documents on autonomy and the diaspora was taking place, and it was taking a long time. So the Mission document might be signed tomorrow if it hasn't already been signed.  I'm especially glad for the timing of this, being posted on Fordham's blog today as the document is being signed. Today is also the first day of the Tradition, Secularization, Fundamentalism conference put on by the Orthodox Studies Center at Fordham.

The Mission document isn't perfect, and I make some criticisms of it in my response. But these criticisms are constructive in nature. This document is a wonderful starting point to the conversation within global Orthodoxy on this vital topic. This Council is calling for future Councils to take place to continue to discuss these and other topics, a proposal which is consonant with Moscow's and others' calls for a fuller Council at a later date. The primates of this Council want the global Church to have regular Councils and synods, just as the 'local' Churches have regular synods of their bishops. So I hope my suggestions for ways to expand upon this work can be considered and codified at a later Council. Having talked to those behind the scenes, I know they are sympathetic to these points, and my text on this document did end up in the hands of the delegation of the Ecumenical Patriarchate. So we can only pray that the Orthodox Church would truly become a voice for peace and healing in the world, declaring "Glory to God in the highest, and on earth peace, good will towards men."

“The Mission of the Orthodox Church in Today’s World” offers timely statement on war, peace, and justice. The nature of conflict has evolved and the Church needs to counsel the faithful on the peacemaking vocation. This document offers an authoritative peace stance, and makes recommendations, but these are mostly too vague and incomplete. In particular, more should be developed regarding faithful responses to violence.

The basis for peace is the dignity of the human person (1.2), and peace is defined as the manifestation of dignity, social justice, freedom, the unity of mankind, and love among peoples and nations (3.1). War, conflict, violence, the arms race, and destructive weapons are all identified as the result of evil and sin (2.2, 4.1). Thus, peace and war are viewed first through a theological lens. The Church’s mission is to address the spiritual roots of conflict; however, the Church is also called to respond to conflict in the world and to make peace. St. Basil is cited as saying “nothing is so characteristic of a Christian as to be a peacemaker” (3.2).

This document definitively states, “The Church of Christ condemns war,” and condemns nuclear weapons and “all kinds of weapons” (4.1). It also calls it a “duty” of the Church to encourage whatever brings about peace and justice (3.5). Specific actions are recommended, including prayer, cooperation with social institutions, cooperation among nations and states, cooperation between Christians, peacekeeping, solidarity, and dialogue (1.2, 3.1, 3.2, 6.1, 6.6).

This list is good, but is incomplete and vague. The Church “supports all initiatives and efforts to prevent or avert [war] through dialogue and every other viable means;” such a statement should be strengthened by specifying some other viable means (4.2). Specifically, all weapons, including nuclear, are condemned, but no calls are made for disarmament or limiting the production and trade of arms, and the use of nuclear weapons is not unequivocally condemned. Likewise, nothing is said of the practice of blessing conventional and nuclear weapons with holy water. In the same vein, while wars based on nationalism are condemned, nothing is said of modernist nationalism generally (4.3). Orthodox nationalism should be condemned, since it divides.

Similarly, while the proven strategies of peacebuilding, sustainable development, and nonviolence are all implicitly endorsed, they should also be explicitly called for. In particular, the viability of nonviolent campaigns and institutions has risen dramatically over the past century. Chenoweth and Stephan (2008) found that nonviolent campaigns are more than twice as successful as violent ones at achieving their goals, and each decade the ratio increases. The language of nonviolence has been employed by many including Patriarch Kirill, while Metropolitan Tikhon of the OCA has called nonviolence “the Gospel’s command,” and Ecumenical Patriarch Bartholomew has called nonviolence a “Christian concept” with Orthodox roots. Given the role of nonviolence in the contemporary world, nonviolence should be mentioned. Wars are rarely openly fought between nations anymore, and conflict today involves greater civilian participation; the Middle East and former Soviet countries exemplify this. Nonviolence is most effective in such contexts, and the Church should recommend Christian investment and participation in nonviolent action, while condemning violent action.

War is condemned without qualification, and yet the document is ambiguous regarding participation in war, “When war becomes inevitable, the Church continues to pray and care in a pastoral manner for her children who are involved in military conflict for the sake of defending their life and freedom” (4.2). While language of ‘inevitability’ is better than the theologically problematic language of ‘necessary evil,’ it would be better to say that the Church cares for all involved in conflict. No elaboration is given regarding what makes a war ‘inevitable,’ or under what conditions fighting is allowed. The only conditions listed are for life and freedom, but ‘freedom,’ a common excuse for unnecessary fighting, is undefined. Martyrdom should also be mentioned as an alternative response to violence. The martyrs faced death and imprisonment, and are lauded over soldiers. Even so, the document glosses over the fact that most soldiers today do not fight for such causes, but instead are employed in ‘humanitarian’ interventions or fighting insurgents. These realities should be addressed, since such military operations are usually the result of nationalism and globalization, both of which are condemned in one form or another (4.3, 6.5).

Also missing is counsel regarding conscientious objection. In this document, the Church promises care to those who fight, but a similar pledge is not made to those who for Christian reasons refuse. Given the strongly anti-war statements in the rest of the document, one might expect that the Church would recommend conscientious objection or disobedience in at least some circumstances. Nothing is said of this, or of the practice of universal conscription in countries like Russia and Greece.

There is a final weakness in the account of violence. Peace is aptly defined as the presence of justice and dignity, rather than the cessation of violence. Along these lines, “oppression and persecution” in the Middle East are condemned, along with religious fanaticism, because they “uproot Christianity from its traditional homelands” (4.3). In response to this, the document calls for a “just and lasting resolution” (4.3). These statements, along with other condemnations of things like secularism and globalized consumer capitalism, are too vague to accomplish anything. In particular, such condemnations can and have served as pretexts for Orthodox Christians to take up arms and engage in interventionist warfare. Peace is defined as the “reign” on earth of “Christian principles” of justice and dignity, and such language may be seen by some to warrant Christian warfare for the sake of establishing such a ‘reign’ (3.1). It would be counterproductive if a document condemning war allowed escape clauses for Christian nationalists to undertake war in defense of “traditional homelands,” or some other noble cause. Such inconsistencies threaten the integrity of the document, and as such the Great and Holy Council should clarify which methods and means are acceptable for addressing injustice. As it is, greater clarification and revision is needed.