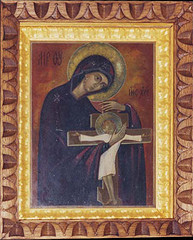 We must seek authentic and profound religious bases in order to understand and justify our yearning for man, our love of man, our path among our brothers, among people.

And warnings sound from two different sides. On one side, the humanistic world, even as it accepts the foundations of Christian morality in inter-human relations, simply does not need any further deepening, any justification that does not come from itself. This world keeps within three dimensions, and with those three dimensions it exhausts the whole of existence. On the other side, the world connected with the Church also warns us: often the very theme of man seems something secondary to it, something that removes us from the one primary thing, from an authentic communion with God. For this world, Christianity is this relation to God. The rest is christianizing or christianification.

We must be deaf to these two warnings. We must not only suppose, we must know that the first of them, coming from a world deprived of God, destroys the very idea of man, who is nothing if he is not the image of God, while the second destroys the idea of the Church, which is nothing if it does not imply the individual human being within it, as well as the whole of mankind.

We must not only be deaf to these warnings, we must be convinced that the question of an authentic and profound religious attitude toward man is precisely the meeting point of all questions of the Christian and the godless world, and that even this godless world is waiting for a word from Christianity, the only word capable of healing and restoring all, and perhaps sometimes even of raising what is dead.

But at the same time, perhaps for centuries now, the Christian soul has been suffering from a sort of mystical Protestantism. Only the combination of two words carries full weight for it: God and I, God and my soul, and my path, and my salvation. For the modern Christian soul it is easier and more natural to say "My Father" than "Our Father," "deliver me from the evil one," "give me this day my daily bread," and so on.

And on these paths of the solitary soul striving toward God, it seems that everything has been gone through, all roads have been measured, all possible dangers have been accounted for, the depths of all abysses are known. It is easy to find a guide here, be it the ancient authors of ascetic books, or the modern followers of ancient ascetic traditions, who are imbued with their teachings.

But there is also a path that seeks a genuinely religious relation to people, that does not want either a humanistic simplification of human relations or an ascetic disdain of them.

Before speaking of this path, we must understand what that part of man's religious life which is exhausted by the words "God and my soul" is based on in its mystical depths.

If we decide responsibly and seriously to make the Gospel truth the standard for our human souls, we will have no doubts about how to act in any particular case of our lives: we should renounce everything we have, take up our cross, and follow Him. The only thing Christ leaves us is the path that leads after Him, and the cross which we bear on our shoulders, imitating His bearing of the cross to Golgotha.

It can be generally affirmed that Christ calls us to imitate Him. That is the exhaustive meaning of all Christian morality. And however differently various peoples in various ages understand the meaning of this imitation, all ascetic teachings in Christianity finally boil down to it. Desert dwellers imitate Christ's forty-day sojourn in the desert. Fasters fast because He fasted. Following His example, the prayerful pray, virgins observe purity, and so on. It is not by chance that Thomas Kempis entitled his book The Imitation of Christ; it is a universal precept of Christian morality, the common title, as it were, of all Christian asceticism.

I will not try to characterize here the different directions this imitation has taken, and its occasional deviations, perhaps, from what determines the path of the Son of Man in the Gospel. There are as many different interpretations as there are people, and deviations are inevitable, because the human soul is sick with sin and deathly weakness.

What matters is something else. What matters is that in all these various paths Christ Himself made legitimate this solitary standing of the human soul before God, this rejection of all the rest - that is, of the whole world: father and mother, as the Gospel precisely puts it, and not only the living who are close to us, but also the recently dead - everything, in short. Naked, solitary, freed of everything, the soul sees only His image before it, takes the cross on its shoulders, following His example, and goes after him to accept its own dawnless night of Gethsemane, its own terrible Golgotha, and through it to bear its faith in the Resurrection into the undeclining joy of Easter.

Here it indeed seems that everything is exhausted by the words "God and my soul." All the rest is what He called me to renounce, and so there is nothing else: God - and my soul - and nothing.

No, not quite nothing. The human soul does not stand empty-handed before God. The fullness is this: God - and my soul - and the cross that it takes up. There is also the cross.

The meaning and significance of the cross are inexhaustible. The cross of Christ is the eternal tree of life, the invincible force, the union of heaven and earth, the instrument of a shameful death. But what is the cross in our path of the imitation of Christ; how should our crosses resemble the one cross of the Son of Man? For even on Golgotha there stood not one but three crosses: the cross of the God-man and the crosses of the two thieves. Are these two crosses not symbols, as it were, of all human crosses, and does it not depend on us which one we choose? For us the way of the cross is unavoidable in any case, we can only choose to freely follow either the way of the blaspheming thief and perish, or the way of the one who called upon Christ and be with Him today in paradise. For a certain length of time, the thief who chose perdition shared the destiny of the Son of Man. He was condemned and nailed to a cross in the same way; he suffered torment in the same way. But that does not mean that his cross was the imitation of Christ's cross, that his path led him in the footsteps of Christ.

What is most essential, most determining in the image of the cross is the necessity of freely and voluntarily accepting it and taking it up. Christ freely, voluntarily took upon Himself the sins of the world, and raised them up on the cross, and thereby redeemed them and defeated hell and death. To accept the endeavor and the responsibility voluntarily, to freely crucify your sins - that is the meaning of the cross, when we speak of bearing it on our human paths. Freedom is the inseparable sister of responsibility. The cross is this freely accepted responsibility, clear-sighted and sober.

In taking the cross on his shoulders, man renounces everything - and that means that he ceases to be part of this whole natural world. He ceases to submit to its natural laws, which free the human soul from responsibility. Natural laws not only free one from responsibility, they also deprive one of freedom. Indeed, what sort of responsibility is it, if I act as the invincible laws of my nature dictate, and where is the freedom, if I am entirely under the law?

And so the Son of Man showed his brothers in the flesh a supra-natural - and in this sense not a human but a God-manly - path of freedom and responsibility. He told them that the image of God in them also makes them into God-men and calls them to be deified, to indeed become Sons of God, freely and responsibly taking their crosses on their shoulders.

The free path to Golgotha - that is the true imitation of Christ.

This would seem to exhaust all the possibilities of the Christian soul, and thus the formula "God and my soul" indeed embraces the whole world. All the rest that was renounced on the way appears only as a sort of obstacle adding weight to my cross. And heavy as it may be, whatever human sufferings it may place on my shoulders, it is all the same my cross, which determines my personal way to God, my personal following in the footsteps of Christ. My illness, my grief, my loss of dear ones, my relations to people, to my vocation, to my work - these are details of my path, not ends in themselves, but a sort of grindstone on which my soul is sharpened, certain - perhaps sometimes burdensome - exercises for my soul, the particularities of my personal path.

If that is so, it certainly settles the question. It can only be endlessly varied, depending on the individual particularities of epochs, cultures, and separate persons. But essentially everything is clear. God and my soul, bearing its cross. In this an enormous spiritual freedom, activity, and responsibility are confirmed. And that is all.

I think it is Protestant mysticism that should follow such a path most consistently. Moreover, in so far as the world now lives the mystical life, it is for the most part infected by this isolating and individualistic Protestant mysticism. In it there is, of course, no place for the Church, for the principle of sobornost', for the God-manly perception of the whole Christian process. There are simply millions of people born into the world, some of whom hear Christ's call to renounce everything, take up their cross, and follow Him, and, as far as their strength, their faith, their personal endeavor allow, they answer that call. They are saved by it, they meet Christ, as if merging their life with His. All the rest is a sort of humanistic afterthought, a sort of adjusting of these basic Christian principles to those areas of life that lie outside them. In short, some sort of christianification, not bad in essence, but deprived of all true mystical roots, and therefore not inevitably necessary.

Mother Maria Skobtsova died on Good Friday, 1945, in Ravensbr ck concentration camp near Berlin. The "crime" of this Orthodox nun and Russian refugee was her effort to rescue Jews and others being pursued by the Nazis in her adopted city, Paris, where in 1932 she had founded a house of hospitality. On the 16th of January 2004, the Holy Synod of the Ecumenical Patriarchate in Istanbul resolved that Mother Maria and three of her collaborators, Fr. Dimitri Kl pinin, Yuri Skobtsova, and Elie Fondaminskii should be added to the church calendar. On the 1st and 2nd of May 2004, there were services at the Cathedral of Alexander Nevsky in Paris to celebrate the newly recognized saints. The essay reprinted here is part of a longer text included in Mother Maria Skobtsova: Essential Writings, translated by Richard Pevear and Larissa Volokhonsky and published by Orbis Books.